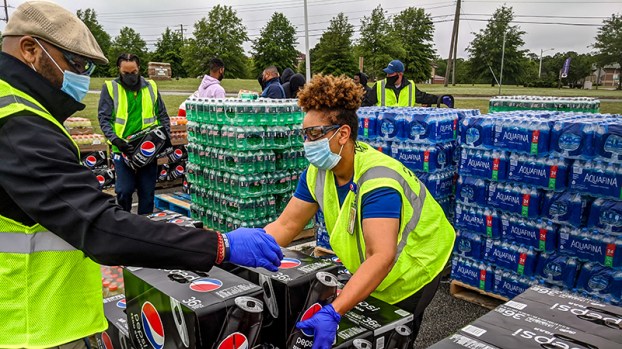 Donzell Powell, left, along with Candice Gunter of Pepsico Suffolk, help prepare pallets of Pepsi products to be delivered Wednesday to the nine fire stations in Suffolk, as well as one in Carrolton and two in Smithfield. The Mount Suffolk and its pastor, Karl Wilkins, helped coordinate the delivery of more than 750 cases of Pepsi products as a way to show their appreciation for the area’s first responders. Jimmy LaRoue photo

Wanting to show appreciation for first responders, The Mount Suffolk with Pastor Karl Wilkins helped coordinate the delivery of pallets of bottled and canned drinks Wednesday to first responders in Suffolk, Carrolton and Smithfield.

Members of The Mount Suffolk, along with about a dozen members of the Nansemond River High School football team, 10 Pepsico Suffolk employees and other members of the community, gathered at King’s Fork High School and helped stack more than 750 cases of Pepsi products — including bottled water, Gatorade, Pepsi Zero and Mountain Dew. They then delivered them to all nine of the city’s fire stations, the Carrollton Volunteer Fire Department and two fire stations in Smithfield.

Each fire station also received a gift card to get dinner for everyone at each location, and children in city daycares also wrote letters that were given out along with the drinks.

Wilkins said he and the church just want to be a blessing to the community.

“When you’ve got people who are willing to put their hands to the plow, it doesn’t take long to pull something like this off,” Wilkins said.

Gabriel Danastor, the unit general manager of PepsiCo Suffolk, along with Paul Pittman, a Pepsico general manager for the Peninsula region, coordinated the project, with Delegate Clinton Jenkins and his wife, School Board member Karen Jenkins, also taking part in the donation.

“It’s a great opportunity for us to give back in the community,” Pittman said. “Obviously, this pandemic has been unprecedented for anything I’ve seen. We just felt like we wanted to support our first responders who’ve been putting their lives on the line, their health on the line, and just give back to them. They’ve been so impactful in the community to help us get through this.”

Danastor said when Pittman called him about getting involved in donating to area first responders, he was all on board.

“I was more than excited to be part of something that can show the community that we are there for them, we’re supportive of their efforts, especially the first responders,” Danastor said, “folks that are going out there regardless. When everybody’s running away, they are the ones going forward, so we’re very thankful.”

Danastor said Pepsico’s contributions pale in comparison to the ones first responders make in the community.

“You look at the effort they put in, and what we’re doing, it’s just nothing compared to the efforts they’re putting in, but at least we can show appreciation,” Danastor said. “We can show that we are very grateful to have people like them in the community that can help save lives out there, so our involvement in this is to help spread some cheer, some love, and to show that we care as a company.”

Suffolk Fire Chief Michael Barakey came out to thank Wilkins and the team of people gathered to load the product for delivery. He said the deliveries will greatly help in keeping department personnel hydrated. Wilkins said the thanks goes to Barakey and Suffolk Fire and Rescue.

“I think we’re in the same business as you all,” Wilkins said. “You guys go out and save lives, and we’re going out trying to save lives too. … I think there’s a common connection.”

Wilkins said providing for first responders is just a part of his church’s overall message of service.

“At The Mount Suffolk, what we always say is we’re a working church,” Wilkins said. “We are called to serve. The gospel that we preach, the man who we follow, Jesus Christ, was a server in the community. So we try to demonstrate serving by what we do.

“And I just believe that if all of us was to grasp that and serve somebody, all of us would be better during this time. This is not a time to be selfish. This is a time to think about your neighbor, your loved ones, even your enemy, and just serve them, because we’re all in this thing and been affected and impacted by this coronavirus.”