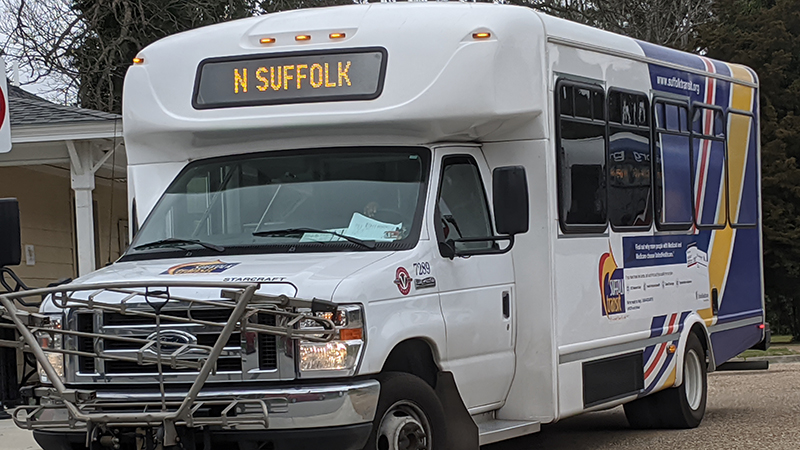 Suffolk Transit bus riders will not have to pay bus fares, at least temporarily, in an effort to limit contact between drivers and riders during the coronavirus pandemic after City Council approved the change Wednesday.

Riders on Suffolk Transit buses have a temporary reprieve on paying their fares.

City Council voted unanimously at its Wednesday virtual meeting to eliminate the fares as a way to improve social distancing between riders and bus drivers during the coronavirus pandemic.

“The thought behind that process, especially as you consider how it works for us, passenger boards the bus, they hand some currency to the driver, the driver gives them a pass, they sit down on the bus,” said Public Works Director L.J. Hansen. “If they transfer, they have to give that pass back to the next driver. There’s a lot of interactions between individuals and the potential for spreading the virus is high in that scenario.”

The state Department of Rail and Public Transportation has requested transit agencies across the state implement emergency practices to minimize contact between people who ride and operate buses and other transit services.

While fares are a portion of Suffolk Transit’s budget, funding from federal, state and local sources make up much of its budget. Hansen said eliminating fares temporarily would not have an operational impact on Suffolk Transit.

“It’s a good thing for our citizens to have that fare waived,” said Councilman Roger Fawcett. “I’m glad we’re able to do that.”

The city’s bus service will be allotted $2.1 million in COVID-19 relief money from the Federal Transit Administration, which is to be used for safety improvements and enhancements for bus stops and for riders on city buses. The federal agency authorized the funding to help transit agencies as part of the Coronavirus Aid, Relief and Economic Security Act.

Hansen said the federal money cannot be used to make up for lost revenue, but rather for operational and capital needs.

Hansen said how the CARES Act money can be spent has not yet been fully fleshed out, but as an example, he said the city could buy a larger bus, such as a 25-passenger bus, than the current 18-passenger buses it has to encourage more social distancing. He said it may have to operate buses more frequently, “but we have to be careful about changing too many things operationally, because this is one-time money and we would be cognizant of the fact that anything we would do operationally would have long-term effects.”

The city’s bus system will also receive $28,297 in operational assistance money from the state Department of Rail and Public Transportation.

Hansen said the Suffolk Transit buses get routine wipe downs and are disinfected daily. Each bus also now has plastic shields and marked seating, and operators wear masks and encourage passengers to wear them. Mosquito Control is also working with Suffolk Transit to create an atomized disinfecting sprayer.

Hansen said ridership had fallen about 30 to 40 percent, but it is rebounding.