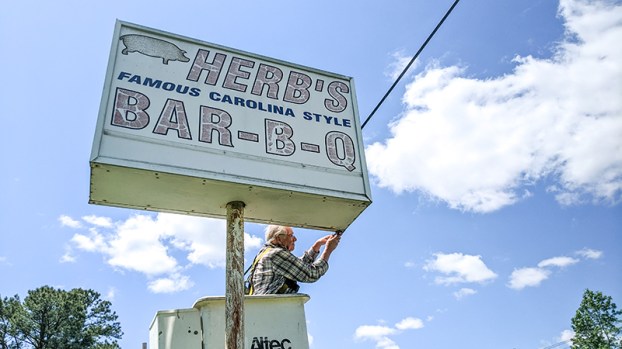 C.L. Holland takes down the Herb’s Bar-B-Q sign Thursday as two of the daughters of its owner, Robert Herbert Brinkley Jr., along with several others, watched and reminisced about the restaurant, which was open for more than a half-century before closing for good in 2007.

It was the kind of place a boy could take his girl, and, more than 50 years later, the same boy in the same parking lot, with the same girl, was flirting with her now as he did then.

But lest you think Herb’s BBQ was just a hangout spot — and it certainly was — there’s a reason both Herb and BBQ were on the sign outside. The place was an institution because of Robert Herbert “Herb” Brinkley Jr., and because of the barbecue.

It was family, and it was home.

When Herb Brinkley opened the restaurant in 1956 off of Carolina Road, he quickly settled on a menu with barbecue at its core.

He smoked his pigs out back and turned it into succulent pork barbecue, the kind that Herb, who didn’t generally place limits on how much free food his employees ate, almost needed to when one over-exuberant one tried to eat him out of product.

“He did have one young man, Jim Knight, told him the same thing, which I guess he told everybody,” said Cynthia Winslow of her father. “Well, he kept fixing himself a barbecue, and every time he’d fix it, he’d put a little more barbecue on it.

“Daddy said, ‘Jim, I have never told anybody they couldn’t eat here for free, but you’re going to have to cut back on how much barbecue you put in that roll.”

Henry Trostle, now 64, was a suburban Virginia boy who didn’t come from the south Suffolk or nearby North Carolina communities that made up Herb’s customer base, and while he missed his father being gone in the Navy, found his home at Herb’s.

“I was a single child, and my dad was in the Navy, so I never really had family,” Henry said.

The barbecue was pretty good, too. To many, that would be a vast understatement. It’s good enough that Henry still tries to replicate it, but he admits it’s not quite Herb quality.

Later, when Cynthia got older, her family would say that she never really worked there, but in fact, she worked at the putt-putt course, which came more than a decade after Herb’s opened in 1951.

Herb stayed with it for more than 50 years. He even tried to retire from it on at least three different occasions, but he kept coming back and running it himself until the day he died in December 2005 at the age of 77.

“He cooked barbecue on Saturday, his birthday was on Sunday, and Monday he died,” Cynthia said.

At his funeral, Cynthia, 68, was floored by the number of people among hundreds there who stood when asked if they had ever worked at Herb’s.

The restaurant stayed open for another two years, run by Herb’s younger daughter, Betsy Briggs, who died in 2009, and Melinda’s daughter, Melanie, before it closed for good.

Wayne Turner, 77, was the boy who took his girl to Herb’s, when he wasn’t working for him.

“This place is responsible for our marriage,” Turner said of him and his wife, Sandra. “She’d come down and she’d flirt. Their mother, Mildred, asked me, ‘Why don’t you ask her out?’ Eventually I did. That was in 1962. And we’ve been married now for 56 years.”

He was handsome enough for Sandra.

A sample of the prices while Turner worked there: bottled or fountain drinks were a dime, a hot dog was 15 cents, French fries 20 cents, milkshakes and square dogs were a quarter, barbecues and cheeseburgers were 30 cents and a small barbecue plate was 65 cents.
“We had such a great time,” Turner said. “Everybody that worked here has such fond memories of the place. It was a family-run business, and we became part of the family.”

Turner once went with the Brinkley family so Herb could get a sport coat. After asking which one Turner liked, Herb tried it on, then had Turner try it on.

“Then they said, this is your graduation prize,” Turner said. “It knocked me for a flip because it was my first new sport coat I’d ever had.”

“It was not just the food,” Henry said. “It was the fellowship, it was just the gathering of people.”

“We grew up with a lot of our friends, and their families came here,” Cynthia said. “A lot of couples met here, and ended up getting together because of Herb. I don’t think I really appreciated it as much growing up as I did once I was an adult.”

Melinda spent much of her teen years working at Herb’s and missing out on things that, at the time, seemed important.

“Sometimes I didn’t appreciate the fact that while my friends were off doing this or that, having fun, I was here,” Melinda said. “In hindsight, I deeply, deeply appreciate the upbringing I received here.”

Both picked up each other’s sentences as they talked about their parents.

“The business and my parents touched so many lives,” Cynthia started to say, with Melinda, 66, continuing, “And I think they always, both of them, instilled in us the value of hard work, being a loyal employee no matter where you worked. I think we just got a lot of good, strong values from the example that they set.”

Much of Melinda’s memories are tied into working at the restaurant, beginning around 1965 at the age of 13, providing curb service on busy nights.

“At the airport there used to be a local racetrack, so Sunday nights were hopping,” she said. “After the races, the place was crazy.”

The faded sign is what brought many of them together Thursday, sharing memories that, unlike the sign, haven’t faded.

He took one side of the sign after his older brother, C.L. Holland, got in a bucket truck to get it down. It’ll be a birthday gift for his son, also named Tom Holland, for his 50th birthday Sunday.

Turner is taking the other side of it and plans to repaint it.

They gathered in the grass where Herb’s putt-putt course used to be, watching the sign come down.

But they weren’t in any hurry to leave.

Riders on Suffolk Transit buses have a temporary reprieve on paying their fares. City Council voted unanimously at its Wednesday... read more