Nurses say they were ‘made for this’ moment 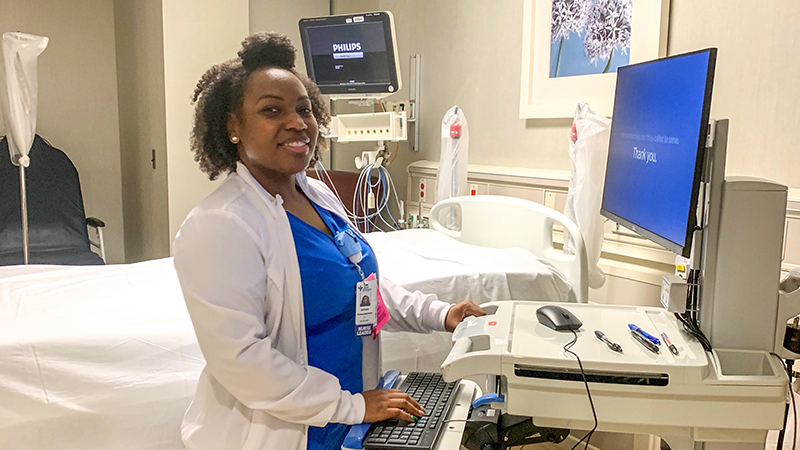 Katisha Johnson, 34, of Suffolk, works as a night shift nursing supervisor at Bon Secours. Maryview Medical Center in Portsmouth. She said nursing is her calling, and said she has a “weird calm about working as a nurse during the coronavirus pandemic. (submitted photo)

It has not been an easy time for anyone on the proverbial front lines of the coronavirus pandemic, in particular for nurses.

During Nurses Appreciation Week, which began May 6 and ends Tuesday, Scott Rampona, a clinical care leader on the night shift at Bon Secours Health Center at Harbour View, and Katisha Johnson, a night shift nursing supervisor at Bon Secours Maryview Medical Center, are doing what they believe they are meant to do.

Rampona, 50, and Johnson, 34, have a healthy respect for the virus, but said this type of thing is why they wanted to get into nursing. Growing up, Johnson saw people she knew with health issues, and she remembers wanting to help them, but not being able to. It’s what pushed her to become a nurse.

“I would say this is my calling,” said Johnson, who lives in Suffolk. “I only wanted to be a nurse ever since I was a little kid. Even though all that’s going on, I was made for this.”

Rampona, while he has multiple family members in the medical field, including a grandfather who he said served as Albert Einstein’s physician for many years and a grandmother who was a nurse, took a more roundabout path to nursing, even though he started out majoring in it before getting a history degree and joining the Army.

After he left the Army in 1997, he got into restaurant management while living in Indianapolis, Ind., and ultimately ended up walking into the nursing department at Anderson University, about an hour northeast of Indianapolis, and asked what he had to do to get into the program.

He graduated and worked at several hospitals before coming to Harbour View in 2008.

He said for the most part, people appreciate the line of work he is in.

“It can be a very tough job,” Rampona said. “Most people, when they go to work, aren’t dealing with somebody dying, or dealing with somebody who’s critically sick. It’s a whole different ball of wax than most careers. … Overall, I think the level of appreciation has always been there, maybe slightly higher nowadays with everything that’s going on.”

Johnson said she feels appreciated, especially by the people with whom she works.

“From the company standpoint, it has changed for nurses who are in the hospital,” Johnson said. “They have reached out more. We get more appreciation for everything. There’s more understanding.”

Rampona, who lives in Virginia Beach with his wife and two sons, ages 7 and 3, and a 23-year-old daughter in the Army, said his time away from work is mostly normal — taking his sons to daycare, homeschooling them, cleaning the house, doing laundry and getting dinner ready. He used to go to the gym to work out, but while those have been closed.

He said he is not apprehensive about having to care for COVID-19 patients.

“I haven’t lost any sleep about it,” Rampona said. “I think I’d be a little more apprehensive with something like Ebola.”

Johnson, who lives in Suffolk and has been working at Maryview for three years, said she tries to get as much rest as possible outside of work, as she usually comes home exhausted, though she said she is not nervous about having to treat COVID-19 patients.
“Weirdly enough for me, it’s like a weird calm,” Johnson said. “I always say why I became a nurse is because I want to help people. No matter what was going on and what I was dealing with, I want to help people. Even though we’re in the midst of a pandemic, and it is crazy, and also putting our lives at risk, we still want to be there for the patient.”

Both say they strictly follow procedures to protect themselves with regard to personal protective equipment and other procedures while still comforting patients as best as possible.

Johnson said she is trying to make sure she stays healthy so she can help patients, but with the stress of her job, especially during a pandemic, she makes sure not to bring her work home with her. The team she works with has a buddy system to allow each other to talk about the day.

“After each shift we try to talk to each other about it and get it off our chest right then,” Johnson said.

She said that while she is doing her best to take care of herself, following proper protocols in and out of the hospital, others worry about her even more.

Still, it’s a career she’s going to stick with because she wants to help people.

“I love it,” Johnson said, “and I don’t see myself doing anything different.”