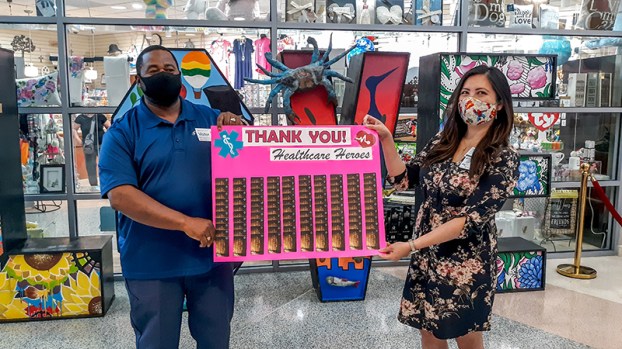 Local business owner LeOtis Williams was at it again this week.

A perennial community helper who does a turkey giveaway every Thanksgiving and already did a giveaway of food and essentials, partnering with other business owners, earlier in the pandemic, wanted to know what else he could do.

“I was trying to plan another food drive and I had not been able to buy in bulk from my suppliers,” he said.

So he started looking at how he could help workers in the health care field.

“I know a lot of people are starting to do a lot of things for the health care industry and our front-line workers, and I wanted to do something that would give back a lot,” he said. “I decided, why not 100 gift cards?”

Williams bought 100 Walmart gift cards at $10 apiece, and donated them to Sentara Obici Hospital this week.

“The Suffolk community has been very good to us,” she said. “We’re feeling the love. It’s just been really overwhelming. The sentiment from the Western Tidewater community, especially the local Suffolk community, has been a major component in keeping our spirits high and helping our staff feel very appreciated and valued at this time of need. It’s been just wonderful to see.”

Santa Ana said the gift cards would be used in prizes for activities for National Hospital Week as well as in other staff recognition. The activities are planned for this special week every year but have taken on special meaning this year, Santa Ana said.

Williams said it means a lot to him personally to be able to give back.

“It’s just my way of trying to reach out and show people how much we appreciate what they’re doing, because they’re putting their life in jeopardy,” he said. “Even though it’s a job, it’s more than that.”