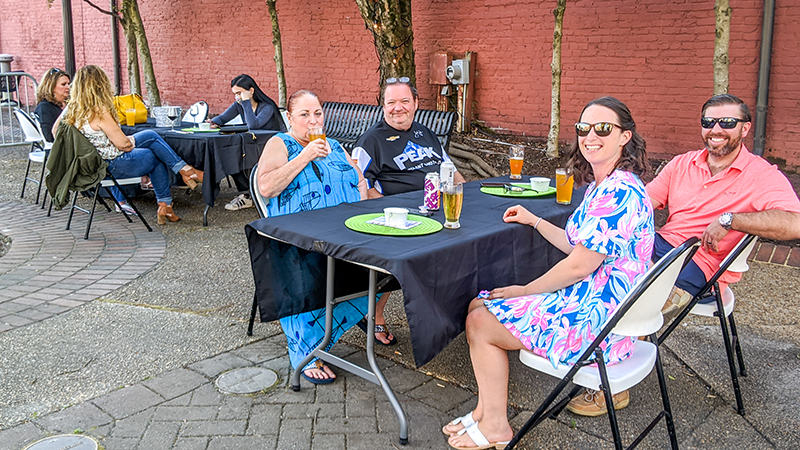 Renee and Frank Jurcik, along with Ashley and Rich Brent, were among the 20 people sitting outside of Uncork’d with their drinks on a warm and breezy Friday evening. On the first day of Gov. Ralph Northam’s Phase I reopening plan, which allowed for outdoor dining and drinking, Uncork’d was one of several places downtown that opened up for outdoor seating.

A warm and sunny afternoon likely would have brought plenty of people downtown and outside Friday, but the state’s Phase I reopening didn’t hurt.

It certainly didn’t for Renee and Frank Jurcik of Whaleyville.

They were among the first people to come out to the outdoor seating area Uncork’d had set up on the corner of Main and Washington streets, enjoying their drinks, the pre-summer breeze and conversation with people they had just met.

“I think this is premature,” Renee Jurcik said of the non-essential businesses opening Friday, “but I’m enjoying it. … You know what, we need our economy back too.”

That’s what got places like Uncork’d, Baron’s Pub and others downtown and across the city open on the first day of the Phase I reopening. Nansemond Brewing Station planned to open its outdoor seating area Saturday.

Uncork’d had what it called a patio pop-up, featuring nearby restaurant Sushi Aka, which it was operating from noon to 11 p.m. Friday, noting that it would adhere to Centers for Disease Control and Prevention guidelines while maintaining social distancing recommendations. Sushi Aka was available for patio takeout from noon to 2 p.m. and 4 to 10 p.m. Friday.

“Cheers to all of our small business pals as we safely reopen to serve our friends and patrons,” read a Thursday Facebook post from Uncork’d.

City Manager Patrick Roberts said the city is trying to be helpful toward restaurants who are looking to provide outdoor eating options.

“We’re trying to be very flexible in helping people identify where they can have outdoor seating and outdoor dining,” Roberts said. “If you see tables and chairs crop up, we’re either issuing a temporary use permit in some spaces, or an encroachment permit.”

He pointed out that outdoor dining is already encouraged in the city’s downtown plan.

“This will be a good test weekend to see how that goes,” Roberts said.

At Nansemond Brewing Station, it planned to have its outdoor patio open Saturday and Sunday from noon until 3 p.m., with limited outdoor seating for up to 12 people, and only for those ages 21 and older.

It asked for people to socially distance themselves while ordering in the tasting room and while seated outside. Per guidelines put in place by Gov. Ralph Northam, it also will be using disposable cups only.

“Please bear with us through this challenging time,” said a Facebook post from Nansemond Brewing Station Thursday. “We are doing our very best to safely navigate our reopening in order to keep our staff and patrons safe.”

River Stone Chophouse and Decoy’s restaurants in North Suffolk also reopened for patio service Friday by reservation only, but some places, like El Korita Restaurante in downtown, chose to continue with takeout and delivery for now.

El Korita said that because it did not have an outdoor patio, it would reopen when the government allows them to open 100 percent to the public.

“We love our clients/family,” a Facebook post from El Korita said. “That’s why we are making this decision so you don’t get disappointed from us. El Korita just wants to treat everyone equally.”

River Stone Chophouse, which had been serving free meals on Fridays — about 15,500 in all — said it couldn’t offer those anymore since it is reopening.

Some barbershops and hair salons began reopening in the city, by appointment only. Crown of Glory Hair Salon on Godwin Boulevard was one of those, as was Kingdom Shears Unisex Salon on Pruden Boulevard.

Per state regulations, Kingdom Shears said it would only be cutting hair for those who had an appointment. It also is requiring people to wear a mask, and they must stay in their car until their stylist or barber comes to get them. It was not allowing anyone to sit and gather in its waiting area. It is also only going to be open on Fridays and Saturdays through June 10 before it said it would gradually return to normal business hours.

While many churches in Suffolk plan to continue with online or drive-in services, some, such as Cypress Chapel Christian Church on Cypress Chapel Road and West Suffolk Baptist Church on Kenyon Court, will be restarting indoor services Sunday.

In a Facebook post, Cypress Chapel said that as a result of agreement among its church leadership, it would reopen its doors for 10 a.m. worship, with no Sunday school or youth gatherings.

As mandated, it will keep to 50 percent capacity in its sanctuary, and said when the space is filled, it would allow people to watch via video in two rooms that it could set up. It also highly encouraged people to wear masks during the service and asked that people not touch one another while staying at least six feet apart.

West Suffolk Baptist Church will be holding a morning worship service at 11 a.m., but it will also post a recorded version of the service later in the day.

More churches will be starting at least a week or two later, including First Baptist Church on North Main Street, Nansemond River Baptist Church on Bridge Road and Believers Church, which meets at HUB 757 off of Bridgeway Drive.

“We believe we can do this because the rate of infection in Western Tidewater is low, with 65 percent of those infections occurring in five long-term care facilities and one prison,” a church Facebook post stated.

It said it would mark seating and be able to exceed social distancing guidelines, while limiting itself to worship services only, with no passing the plate for offerings, no childcare and shorter services overall. It also encouraged people to wear masks and asked for people to not touch each other to hug, shake hands or offer fist bumps. For those in vulnerable categories or those who are not comfortable attending services in the sanctuary, it said people could continue to watch online.

Nansemond River Baptist Church will also reopen for worship in its sanctuary May 24, with identical services at 9:30 and 11 a.m., though it still plans to livestream services. It said it would assign small groups a worship time. It plans to block off every other pew, and will block a minimum of six feet in the middle of longer pews. It will also have a single entrance with hand sanitizing stations, and a no-touch entrance and exit of all areas except bathrooms.

It will also sanitize the sanctuary between services, and said it would not offer childcare or other youth worship services.

Believers Church announced it would delay the restarting indoor church services until June 14, when it will have a welcome back to campus service, though its senior pastor, Jamey Stuart, said their plans are subject to change.

Stuart, in a recorded video message on its Facebook page, said it wanted to be sensitive to the impact its decision would have on people, and noted that some people who attend the church had family members who have died from COVID-19.
The delay is to allow it to accumulate supplies for hand sanitizing and to make the auditorium safer for attendees, while also allowing for fully developed plans to clean the auditorium and restrooms between services, he said.

But there was no delay for some restaurants and drinking establishments Friday, and that was fine with the other couple sitting with the Jurcik’s at Uncork’d, Ashley and Rich Brent of Chesapeake.

They had the night planned, and knew they’d be at Uncork’d, saying it felt like home to them.

“We’re 100-percent comfortable sitting outside,” Ashley Brent said. “We don’t have any qualms about it.”