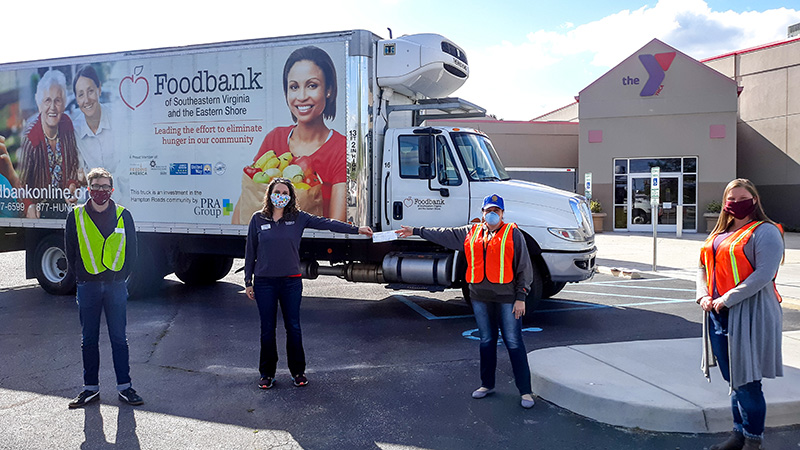 From left are Zach Nissen and Taylor Miller with the Foodbank of Southeastern Virginia and the Eastern Shore, Rotary Club of Suffolk President-elect Margie Wiley, and the Suffolk Family YMCA’s Katie Burgus.

Ongoing food giveaways by the Suffolk Family YMCA and Foodbank of Southeastern Virginia and the Eastern Shore got a boost this week with a sizeable grant from local humanitarian organizations.

The total will provide an estimated 750 to 800 boxes of food to families, said Rotarian Margie Wiley.

Wiley said the local club applied for the grant for the foodbank and YMCA giveaway because it could make an immediate impact.

“We felt that there was no better cause than to provide food,” she said.

Dr. Ruth Jones Nichols, president and chief executive officer of the Foodbank of Southeastern Virginia and the Eastern Shore, said the grant was timely.

“Over the past couple of months, the Foodbank has been working tirelessly alongside strategic partners who share our commitment to serve the most vulnerable populations impacted by the COVID-19 pandemic,” she said. “We are grateful for the generous and timely donation from the Suffolk Rotary Club. These funds will directly support our hunger-relief efforts for individuals experiencing food insecurity in Suffolk at this critical moment.”

The food giveaways at the YMCAs have been going on since late March, said Katie Burgus, Suffolk Family YMCA district vice president. Boxes of food are given away at the Suffolk, Franklin, Greenbrier and Granby locations. The food is provided by the Foodbank as well as by individual donations at YMCA locations.

Burgus said the first distribution in Suffolk gave out 121 boxes. The highest number was 438.

“The need has increased significantly throughout the crisis,” she said.

The contents of each box vary but typically include shelf-stable foods that are sustaining, such as peanut butter, pasta and pasta sauce, oatmeal and more. Some boxes may also include produce or non-food needs like toiletries.

Volunteers help with traffic control, intake and loading boxes. Groups such as the board of directors of the Suffolk Family YMCA, the Rotary Club, the Suffolk Chapter of Links Inc. and others are helping.

Wiley added that the food giveaway meets the four-way test Rotarians use to evaluate everything they think, say or do: “Is it the truth? Is it fair to all concerned? Will it build good will and better friendships? Will it be beneficial to all concerned?”

“It made sense that we would do it,” she said.

The food giveaway at the Suffolk Family YMCA is taking place from 5:30 to 7:30 p.m. each Tuesday, but the available boxes almost always run out before 7:30. One car can pick up for up to three households.