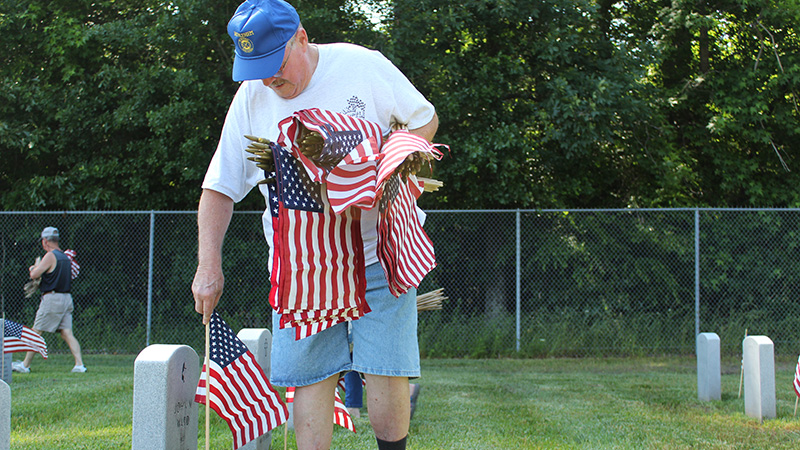 A man helps place flags at Albert G. Horton Jr. Memorial Veterans Cemetery prior to Memorial Day 2018. This year’s official ceremony has been canceled, but people can help place flags on Friday, and the cemetery will be open on Monday for visitors.

Those who sacrificed and died in service to country will still be remembered and honored this Memorial Day, albeit differently, due to the coronavirus pandemic.

Though the Albert G. Horton Jr. Memorial Veterans Cemetery will not hold its own Memorial Day ceremony as usual, it will open its gates Friday for those wanting to lay flags at gravesites. People will be allowed to come to the cemetery’s back gate Friday afternoon from noon until 5 p.m. to place flags at the gravesites.

The Avenue of the Flags will also be open Friday through Monday, weather permitting.

Instead of a ceremony at the cemetery in Suffolk and at other state veterans’ cemeteries, the state Department of Veterans Services will hold one statewide remembrance at the Virginia War Memorial in Richmond to be broadcast at 10 a.m. Monday on Facebook, and on TV in different parts of the state, including on WTKR in Hampton Roads.

According to Tina Parlett-Calhoun, director of communications for the Department of Veterans Services, it did not want to outright cancel its Memorial Day ceremony.

“We wanted a way for people to be able to take part, at least virtually,” Parlett-Calhoun said. “So that’s what we came up with.”

While disappointed to not have ceremonies at the state’s cemeteries, Parlett-Calhoun said there is the potential for many more people to watch it.

“We thought it was a way to do it safely and provide opportunities for even more people than typically would have the opportunity to take part in the ceremony,” Parlett-Calhoun said.

Local American Legion and Veterans of Foreign Wars members were able to take part in a filming at the Horton cemetery. Footage from it will be included in a roughly three-minute montage to be shown at the end of Monday’s ceremony.

“We wanted to blend it together and show just kind of the togetherness when a lot of people are feeling very distant right now, everybody coming together in Suffolk,” Parlett-Calhoun said.

For those coming out to place flags Friday, Parlett-Calhoun said 30 people at a time will be allowed into the cemetery and will be divided into groups of 10 in three separate gardens. The department is asking for people to wear face coverings. Cemetery staff will be on hand to help with flag placement. On Memorial Day, though there will not be a ceremony at the Horton cemetery, there will be a single staff member on site, and people will be allowed to visit, following social distancing guidelines.

“With all that’s going on, we’re not going to forget the folks that have sacrificed,” Garlitz said.

Garlitz and a small team of American Legion officers will lay wreaths and crosses at the monuments in Cedar Hill “to let people know it will not go unnoticed this year.”

He attempted to put together a program similar to past years, but with the coronavirus pandemic, he said trying to secure a speaker was difficult. Still, there was never a thought of not honoring the ultimate sacrifice of those who served.

“Our fallen,” Garlitz said, “will definitely be remembered.”

The United Daughters of the Confederacy, which typically holds an event at Cedar Hill Cemetery the Saturday before Memorial Day, will not do so this year but will put flags out on Friday.

Those wanting to watch the 2020 Commonwealth’s Memorial Day Ceremony at the Virginia War Memorial in Richmond can tune in at 10 a.m. Monday to WTKR, and can also watch on Facebook at facebook.com/virginiaveterans or at facebook.com/virginiawarmemorial. The event will be closed to the public. Among those taking part include Gov. Ralph Northam (pre-recorded), Virginia War Memorial Director Dr. Clay Mountcastle, along with special guest speakers and participants.