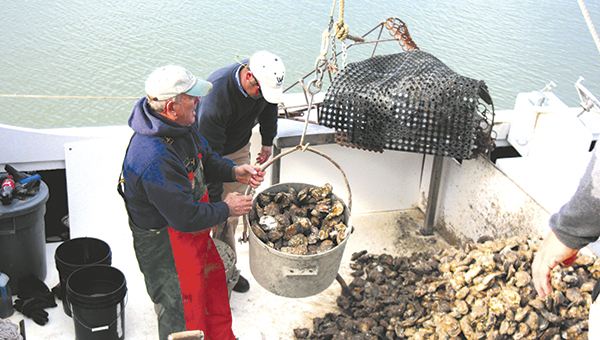 Robbie and Ben Johnson bring in the oyster harvest in Eclipse during a previous oyster season.

The Virginia Supreme Court said Monday it would hear an appeal in a lawsuit filed by local oystermen against the city of Suffolk and the Hampton Roads Sanitation District.

A decision in the case either way could have far-reaching, precedent-setting implications, perhaps nationwide, at the intersection of environmental caselaw and caselaw pertaining to inverse condemnation — the taking of private property for a public purpose without just compensation to the owner.

The plaintiffs alleged that by the city periodically allowing untreated stormwater and sewage to be discharged into the Nansemond River, and by HRSD periodically doing the same with untreated sewage, the government has “taken” their property by causing the river to become so polluted that they cannot harvest oysters from the grounds where they hold leases to do so.

A hearing was held in front of Circuit Court Judge L. Wayne Farmer on April 9, 2019. As a result, the lawsuit was dismissed in September 2019, but the plaintiffs appealed.

The oystermen’s appeal states the trial court erroneously based its ruling on federal caselaw interpreting the U.S Constitution, because the oystermen’s claims are based on the state constitution. In addition, the appeal states the trial court erroneously relied on obsolete caselaw from 1919, predating many of today’s environmental laws and regulations.

Joseph Waldo of Waldo & Lyle, attorney for the oystermen, said Wednesday that merely the Virginia Supreme Court’s agreeing to hear the case is a big deal.

“The Supreme Court of Virginia has said this case is important enough to determine whether or not the city’s right and they can discard waste and human sewage into the Nansemond River,” Waldo said. “It’s a very important, precedent-setting case.”

The city and HRSD are under consent decrees for previous violations of clean-water laws.

“It will be interesting to see what the city says, because their position is governments can pollute the river, that they have a right to do it,” Waldo said. “That’s why those oyster beds are not safe to use at certain times, because the city has allowed its raw sewage to be discharged into the Nansemond River. It doesn’t happen every day, but it happens enough from time to time that a large amount of these oyster beds have been closed because of the human fecal matter in the river.”

Dave Arnold of Pender & Coward, an attorney for the city, stated by email Wednesday that the city denies the allegations in the lawsuit.

“We staunchly dispute that the City of Suffolk is in violation of a consent order or that it has committed any wrongdoing,” he wrote. “A judge has since ruled in the City’s favor and dismissed the case. The plaintiffs have now appealed their defeat, and the City continues to deny these false allegations.”

The case will likely be heard by the Virginia Supreme Court this fall. If the supreme court reverses the trial court’s finding, the case would return to Suffolk Circuit Court for a trial.