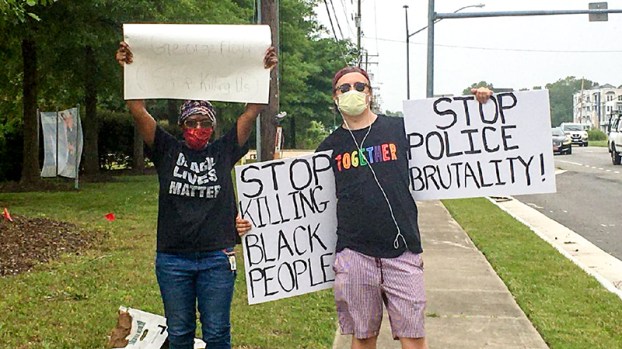 The death of an African American man at the hands of police in Minneapolis, Minn., over the holiday weekend alarmed many people — and spurred at least a couple of people in Suffolk to direct action.

Video taken by bystanders shows George Floyd, 46, face down on the road being held down by a police officer kneeling on the back of his neck. Photos from other angles appear to show two other officers holding down his torso and legs.

In the beginning of the video, Floyd can be heard saying, “I can’t breathe,” “My stomach hurts, my neck hurts, everything hurts,” and asking for water. As the video progresses, Floyd talks and moves less. By four minutes into the video, he is no longer talking or moving at all and appears unconscious.

Bystanders pleaded with the officers to get off of him and to check his pulse, becoming audibly more frantic and horrified after Floyd appears to lose consciousness. The bystanders pointed out his nose is bleeding and said multiple times, “He’s not even resisting arrest.”

According to the Minneapolis Police website, the police had responded to an alleged forgery in progress and “located a suspect in a vehicle.” The statement says the suspect “physically resisted officers.” Another video brought to light Wednesday showed Floyd was handcuffed early in the encounter, before he was ever on the ground.

A Minneapolis Fire Department incident report states that Floyd was unresponsive and pulseless in the ambulance, despite being shocked by the monitor and ventilated. His condition did not change until he was declared dead.

A Hennepin County Medical Examiner press release states the cause and manner of death is pending further testing and investigation.

The four officers involved were fired after the video surfaced but had yet to be charged as of Wednesday. The original incident happened Monday.

The video sparked outrage, and one of those outraged was Joshua White.

White, a Suffolk native who lives in Brooklyn, N.Y., is visiting home right now because he lost his job as a chef due to the coronavirus pandemic. He said he was motivated to act after seeing the video of George Floyd dying.

“That was definitely the straw that broke it,” he said. “I said, ‘It’s time to take action.’”

White bought materials for posters and made two that said, “Stop killing black people!” and “Stop police brutality!” He stood in front of the North Suffolk police station for about five hours.

“I think people can use privilege for positivity instead of negativity,” he said. “I think it’s my right and owe it to humanity to use my privilege and power. It’s time for people to talk about it and realize it’s not just a black issue. It’s a humanity issue.”

He was soon joined by Loura Brown, of Suffolk, who said she had felt heartbroken and despondent after seeing the video of Floyd dying on the street.

“I just started feeling like nobody cares,” she said. “People just keep getting away with this.”

But then she was encouraged when she saw White holding his posters on Bridge Road. The two hadn’t previously known each other.

“This man out there, he cares, and that’s enough for me,” she said. She went to the store, bought posters and markers and made a sign that read, “His name was George Floyd. Stop killing us.” She came back to stand beside White.

“He really blessed me,” she said emotionally. “I needed to see that.
Many motorists honked their agreement with the two as they passed by. White said he was encouraged by the support.

“We are all equal in our existence, and some people forgot that,” he said.

The Suffolk (VA) Chapter of the Links, Incorporated has been making a difference during the COVID-19 pandemic by partnering with... read more