No injuries in early morning fire 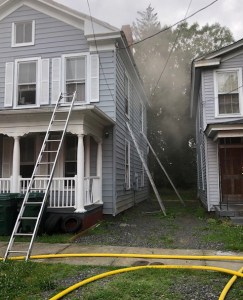 Emergency Communications was contacted at 6:32 a.m., and the first unit arrived on scene in the Olde Town neighborhood at 6:36 a.m.

Chief Michael Barakey said the first arriving fire units found heavy smoke showing from the multi-story residence. The occupants had evacuated prior to their arrival.

Battalion Chief Demitri Wilson advised that the residence sustained heavy damage to the first floor with some extension to the second floor.

Four persons have been displaced and will be assisted by the Red Cross. There were no injuries. The fire was called under control at 7:09 a.m.