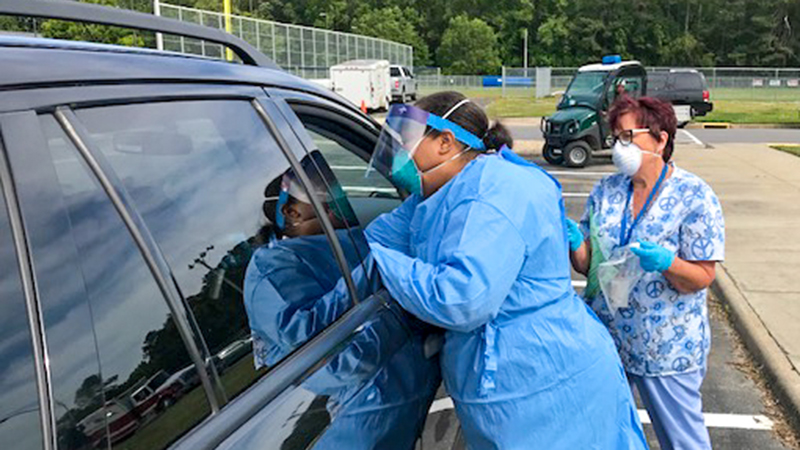 Workers prepare to test someone for COVID-19 at a community drive-through testing event in Franklin earlier this month. Two events are set for Suffolk in June. (Virginia Department of Health Photo)

Two community testing events for COVID-19 are coming up, and all are welcome to come and be tested on a first-come, first-served basis.

Dr. Todd Wagner, director of the Western Tidewater Health District, has a message for those who might be thinking about coming: don’t be scared.

“It’s a little bit uncomfortable having something a little further in your nose than you’re used to,” he said. “A lot of people sneeze after, or they kind of shake their heads.”

But, he asserted, “It’s certainly not painful.”

That may be up for debate, but it’s probably not as bad as one might think.

The testing events will take place on June 5 at the Health & Human Services Building, 135 Hall Ave., and on June 10 at Bennett’s Creek Park, located at 3000 Bennetts Creek Park Road.

On both days, testing will take place from 10 a.m. to 2 p.m. or until tests run out. All of the testing will be free.

Wagner said Suffolk Police will cordon off areas to provide an orderly flow of traffic. Most people will arrive by car, but people are also allowed to walk up to the site.

A line usually starts forming around 8, Wagner said. Volunteers will go from car to car and collect demographic information and ask if people are having any symptoms.

Wagner stressed that asymptomatic people are welcomed and encouraged; the information about symptoms will be just for their records. It’s important to identify those who may be asymptomatic spreaders and to get a good cross-section of the community as a whole.

Staff members in full personal protective equipment will collect a nasopharyngeal sample — in other words, a deep nasal swab.

“We do have to get in there fairly deep in order to get a good sample,” Wagner said. “We don’t want them to have to come back or get a result we can’t use.”

This is not an antibody test, and unless you currently have the virus, it cannot tell if you have previously been exposed to it, according to a city press release.

Wagner also said all ages are encouraged to come.

People who test positive will receive a phone call in three to four business days, Wagner said. “Maybe a little sooner, but we like to underpromise and overdeliver,” he added.

Those who are negative will be notified by mail, and by the time they get the mailing, they will likely already know they’re negative due to the lack of a phone call, Wagner said.

“We’re very excited to be able to bring these tests to the public here,” Wagner said. “The city’s been very supportive.”