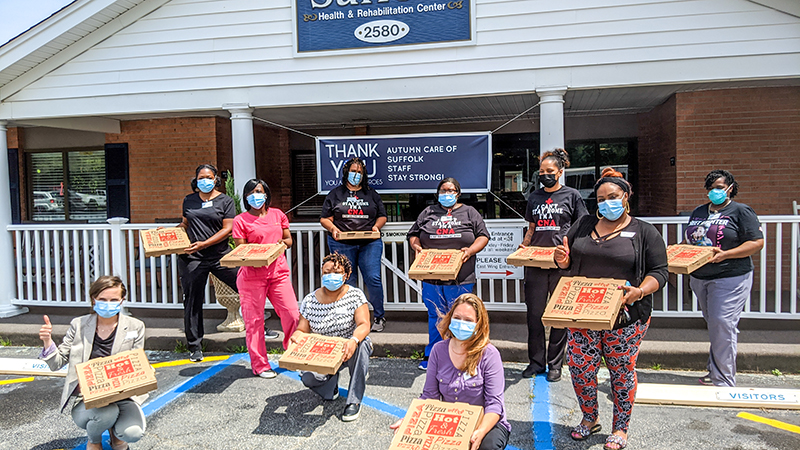 The staff at Autumn Care of Suffolk Health and Rehabilitation Center received free Amici’s pizza Wednesday from Queen of Virginia Skill and Entertainment.

Employees at 13 Hampton Roads nursing homes, including two in Suffolk, received free pizzas Wednesday as part of Queen of Virginia Skill and Entertainment’s efforts to boost small businesses while serving those who are taking care of others who have been affected by the coronavirus pandemic.

The organization bought 36 pizzas from Amici’s in downtown Suffolk, delivering 14 to Autumn Care of Suffolk Health and Rehabilitation Center on Pruden Boulevard and another 22 to Bon Secours Maryview Nursing Home off of Bridge Road.

In Norfolk, Portsmouth and Newport News, fire departments delivered the pizzas to the health care facilities.

“We really wanted to help our restaurants,” Rubin said, “because they have our games and, not only are people not able to play our games, but more importantly, they haven’t been able to go in and dine and help these restaurants. They’ve been the most impacted segment of our economy, frankly.”

Besides Amici’s in Suffolk, the group bought pizzas from the Amici’s in Portsmouth, Azalea Inn in Norfolk, Chicho’s in Chesapeake and Virginia Beach, and Anna’s in Hampton, which also made pizzas for Newport News.

But the pizzas were also about giving a boost and showing appreciation to workers in long-term care facilities.

Rubin said he and his wife, Sara Jo, have a special relationship with the non-profit Beth Shalom Village in Virginia Beach. He said he wanted to help those working at nursing homes who are dealing daily with the potential of COVID-19 to impact them. Sara Jo Rubin, chief operating officer at the Rubin Communications Group, made the pizza deliveries in Suffolk.

“It was a great way to help the restaurants — they are the people that host our games, and so they appreciate it,” Rubin said. “They’re making some money today off of us giving them money to make the pizzas. And then, the pizzas are going to the (nursing homes). … It was a great, great partnership among a lot of organizations, companies, institutions in the area.”

Joel Rubin also noted the General Assembly’s vote to delay a ban on skill games for a year and instead tax the terminals to provide revenue for a special COVID-19 Relief Fund to be administered by Gov. Ralph Northam, with 84 percent of the tax collections from it to go to the fund, and the other 12 percent going to the city or county where the bars and restaurants are located.

“We wanted to draw the connection that if you come play the games now that the restaurants are starting to partially open, and hopefully fully open, that you know that you’re helping support good causes, including nursing homes.”

The Suffolk nursing homes were both appreciative of the pizza.

Sara Jo Rubin, chief operating officer at the Rubin Communications Group, gathered the pizzas from Amici’s around 11 a.m. and made the deliveries.

“It shows how much even the state and everyone in this area, everywhere, appreciates us,” said Bon Secours director of nursing Barbara Cooperwood, “and we know we have a lot of people saying we appreciate our heroes and everything. And one thing I do like is that it’s for everybody, including housekeeping, maintenance, everybody who works at all of the facilities, not just nurses and CNAs (certified nursing assistants), but everybody, so we really do appreciate that.”