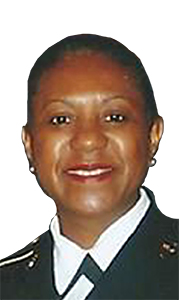 Marjorie Laverne Adams Pratt, of Upper Marlboro, Md., peacefully and quietly entered into eternal rest on Sunday, May 31, 2020, at The Mandrin Inpatient Care Center in Howard County, Md. Marjorie was born Aug. 17, 1950, in Suffolk, to the late Richard L. Adams and the late Gloria E Scott-Adams. She was preceded in death by her brothers, James M. Adams and Elvin L. Adams.

She was the beloved godmother of Myron Vance (Heather), of Lexington, Ken.

She is survived by sisters, Ruby M. Warren, of Fayetteville, N.C., Betty A. Littlejohn (Rufus), of Alexandria, and Aleta V. Adams-Allen (Guy), of Woodbridge.

Marjorie lived her early years in Suffolk, where she was a member of Piney Grove Baptist Church and sang in the choir. She attended John F. Kennedy High School and later Virginia State University and National Louis University, where she obtained a master’s degree in managerial leadership.

Marjorie’s enthusiasm for life was evident through her capacity for hard work and play. She worked for the Government Accountability Office as an evaluator of government programs, where she retired after 34 years of service.

While working at GAO, Marjorie spent time in both the District of Columbia Army National Guard and the Army Reserve. She retired from the Army Reserve as a paralegal, non-commissioned officer, sergeant major, after 30 years of service.

After retirement, Marjorie worked part-time as a substitute teacher in the Prince George’s County school system. Her love was teaching high school students. She supported her discipleship group at Alfred Street Baptist Church and traveled throughout the USA and abroad with special friends and family members. She was the secretary for Veterans of Foreign Wars (VFW) Auxiliary Post 7757, Largo-Kettering, Md. Marjorie loved people and was in constant contact with those closest to her. You could always depend on her for lively conversation or a listening ear if you needed to talk. She had a giving heart and contributed to support others in need and youth education.

Professional services rendered by Wiseman Funeral Home, 7529 Old Alexandria Ferry Road,  Clinton, MD 20735. There will be a viewing from 2 to 3 p.m., Friday, June 12, 2020, followed by a private service at 3 p.m. in the Wiseman Funeral Home Chapel (limited seating, masks and gloves are required). Interment will be at the Quantico National Cemetery.