City residents get tested for COVID-19 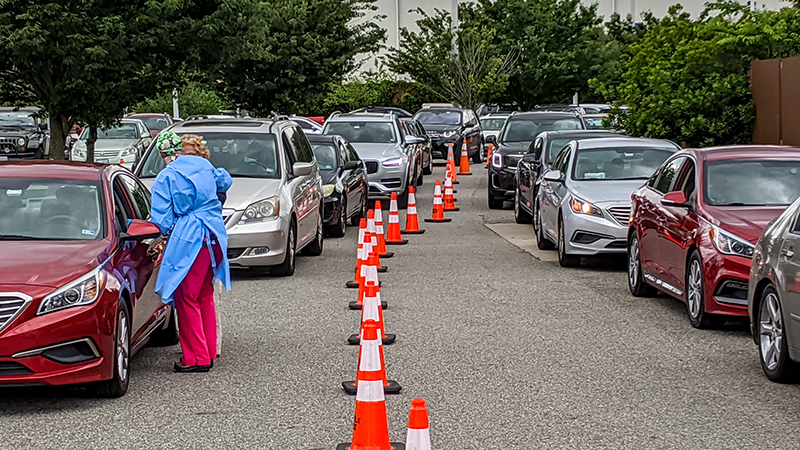 The Western Tidewater Health District, partnering with the city, held a drive-through community testing for COVID-19 Friday at the Health and Human Services building in downtown Suffolk. About 500 people were expected to get swabbed to determine whether they had the virus. Another testing event will be held at Bennett’s Creek Park Wednesday, in which another 500 tests will be available to residents on a first-come, first-served basis.

While Rosa Steward appreciated the opportunity to get tested for COVID-19 on Friday, it didn’t make it feel any better when the cotton swabs were inserted into her nostrils.

“Awful,” Steward said after she was swabbed while sitting inside her car at the Health and Human Services building in downtown Suffolk. “It burns. I hope we don’t have to do it again.”

The plan was to test about 500 people on Friday. Most took the test while sitting in their cars, though there was a steady trickle of people walking up to get tested.

The testing in Suffolk is the first in the city in which anyone, including children, could get tested. There will be another community testing day from 10 a.m. to 2 p.m. June 10 at Bennett’s Creek Park in North Suffolk for up to 500 people.

In addition, a special testing for the Nansemond Indian Nation was set for June 6.

They’re all part of a point prevalence survey by the Virginia Department of Health and the Western Tidewater Health District to determine who has COVID-19, regardless of who is exhibiting symptoms at the time.

Edmond Hardy was another who drove up to be tested and described the feeling as “different.” Hardy, too, was thankful to have the opportunity to be tested.

City Manager Patrick Roberts said the lines of cars began forming about two hours before testing was to start.

“This has just been an overwhelming success,” said Roberts, who himself got tested for COVID-19. “This is everything we had hoped it would be today, and we’re going to have a big crowd next week.”

To streamline the process, people getting tested filled out a short form asking for biographical information as well as whether they have experienced recent symptoms for COVID-19.

When they got to the front of the line, testing officials took the forms and confirmed the information before administering the test. At that point, a health care worker inserted a cotton swab for about 10 seconds into each nostril. People were then able to get a small bag that had information about COVID-19, as well as ham biscuits from Holland’s Country Gourmet.

Anyone with a positive test will get a phone call, and everyone who gets tested will get a confirmation of their result in the mail.

“We had a good line of folks when we got here this morning, which is typical for all of these events,” Drewery said. “At events we’ve done in Franklin and other localities, we’ve generally had about 100 to 150 cars in line when we opened up. We can move folks through pretty quickly. We’ve got a group of volunteers who do the registration for us. They move through the queue and then once you get to the tent, it’s less than two minutes.”

Drewery said that by Wednesday, the state health department will have tested about 5,000 people in the Western Tidewater Health District, outside of tests done at hospitals, or about 3 percent of the district’s population of nearly 155,000, according to 2019 U.S. Census Bureau estimates. That’s within the 2- to 4-percent goal state health officials have set for testing throughout the state. The first couple of big testing events the health department did were in long-term care facilities and other congregate settings before taking them into communities.

Overall, 6,685 people have been tested in the health district, with a seven-day positivity rate of 4.3 percent. The positivity rate has been on a steady decline since mid-April.

In Franklin, the health department tested about 450 people over two days, with just 2.5 percent testing positive for COVID-19, according to Dr. Todd Wagner, director of the Western Tidewater Health District.

Drewery said that once a vaccination for COVID-19 is developed, they would set up a similar plan to get people vaccinated.

Mayor Linda T. Johnson was another of those who walked up to get tested. She said it was a painless process and looks forward to more testing events in the city.

“Nothing to it,” Johnson said after her test. “I think it’s phenomenal. I think this is the way we’re going to handle this situation is to keep doing this. The more we test, the more we keep it away from our folks.”

Wagner hopes to take a closer look at the demographical breakdown with COVID-19 in the district once the results come in from the community testing events in Suffolk. He oversaw the testing Friday and called it a success, saying he wants to test more, but laboratory capacity limits how much testing can be done.

“Once that ball gets rolling, I feel it’s very smooth,” Wagner said. “People aren’t asking questions about why does this takes so long, people have been very appreciative, so I feel very good about it.”