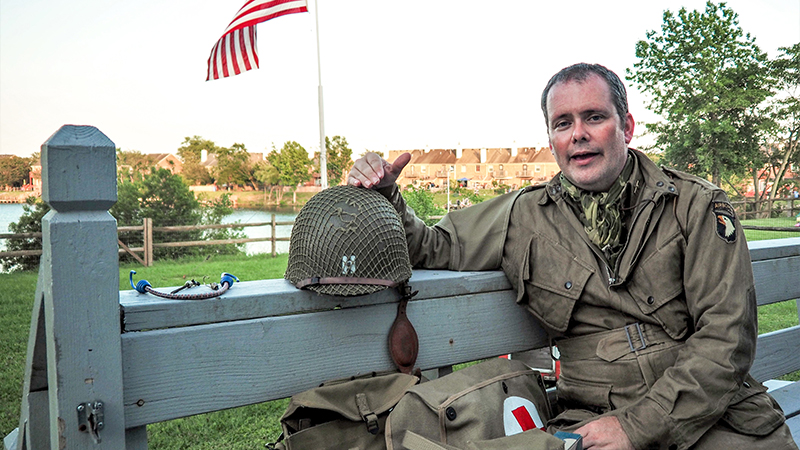 On June 5-6, 1944, the allied invasion of France commenced. Many recall scenes of carnage and destruction across fields of fire guarded by German troops as more than 150,000 U.S., Canadian, and British troops stormed the beachheads. The D-Day invasions that took place 76 years ago this week spearheaded the way for victory and the liberation of Europe. Central to the allied victory was the airborne insertion of paratroopers and glider borne troops from the U.S. Army’s 101st Airborne Division.

While Operation Overlord seemed a distant memory for many, on the anniversary of the invasion, Suffolk-based attorney, Kevin Frank, with Randall Page, PC, keeps the memory of the airborne troops at the forefront. His weapon of choice in the fight makes history relevant: accurate historical re-enactments with his group, loosely centered around the 101st Airborne Division’s Headquarters.

Like most attorneys with the Suffolk law firm, Kevin spends most of his time defending clients in both criminal and civil matters. He spent some time at his home recently and shared some candid thoughts on re-enacting and its relevance to him and his group. He started his interview, dressed in a well-worn, period-specific uniform that was worn by the 101st, quite candidly, and noted, “I thought about studying history more in college, and I took a lot of history classes. History is something from when I was my boys’ age that interested me.”

He went on to describe his journey in the classroom teaching middle and high school students history in Portsmouth. His passion for education brought him to the classroom, and he noted some constraints that would raise eyebrows with educators, such as bringing reproduction military gear into the classroom. After a few years in the classroom, he eventually transitioned to the courtroom, and the history of the 101st Airborne was something that has always stayed with him.

Kevin went on to describe some of the stories of courage and sacrifice that the 101st Airborne endured behind enemy lines. As he shifted in his uniform with a definite lack of sweat-wicking ability, he noted, “Paratroopers were men that volunteered to be paratroopers. Wherever they landed in Holland, they were going to be surrounded; they had to sort it out, improvise, adapt and overcome and still accomplish their objectives.”

He also added elements of detailed accuracy by taking out some of the items in his pockets. A dinner ration, identification cards, letters that would have been written home, even paybooks and charts are all small pieces that he and his group carry on them when re-enacting. These are things that allow his group to bring history off the page at re-enacting events throughout the region, at airshows and even at school events. He even noted the authenticity of their re-enacting, noting that “you get to see everything from how they ate, how they slept, and their weaponry.”

Kevin reflected on the bond that his group has with area veterans, including his group’s affiliation with the 101st Airborne Division Association. He noted, “There are so few of them, and we are quickly approaching the day when there will be none left from the war. For us as re-enactors to have that time with them, to wear their uniform and be amongst them is very powerful.”

Lastly, he also noted the oral histories and stories that they share, and noted that “we now carry their stories. We don’t do this to look a part as if it were a film; we have a responsibility as re-enactors to tell their stories. Whether it’s the uniforms we wear, the camps we set up; whether it’s something people are seeing or a private event, we do it to honor these men.”

Taking a bite out of Phase II