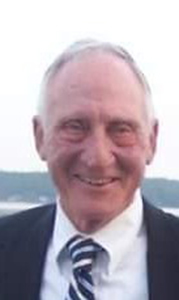 Arthur Woolford Raine, of Pocomoke City, Md., passed away Friday, June 5, 2020, after a long and courageous battle to overcome the effects of a severe stroke. He was born in Richmond on March 15, 1938. He was the son of Michaux and Missouri Raine and was raised on a farm on the Nansemond River in Chuckatuck. Arthur graduated from Hampden-Sydney College in Virginia in June of 1959 with a degree in mathematics.

Arthur’s entire career was spent at NASA Wallops Island, starting in 1960 as an aerospace engineer responsible for development of computer software systems for processing radar tracking data and development of command and destruct software for rocket propelled systems. Leading up to the time of his retirement, he was comptroller of NASA Flight Center, Goddard Space Flight Center.

Arthur will be known for his devotion to his family and friends, his longtime involvement with Saint Mary’s Episcopal Church, serving as a vestryman, senior warden, Finance Committee chairperson, treasurer, lay reader and eucharistic minister. He worked for many years as president/coach of Pocomoke Little League. He served as chairman of the Pocomoke City Middle School Advisory Board and finance chairman of the Samaritan Ministries. He was a longtime member, president and treasurer of the Pocomoke City Rotary Club. Arthur will be remembered for his love of the game of golf, woodworking and gardening. He will be missed for his helpful spirit and good-natured sense of humor.

A memorial service will be scheduled for a later date.

Otelia Suiter transitioned from this life Monday, June 8, 2020, at her residence. A celebration of life service will be... read more