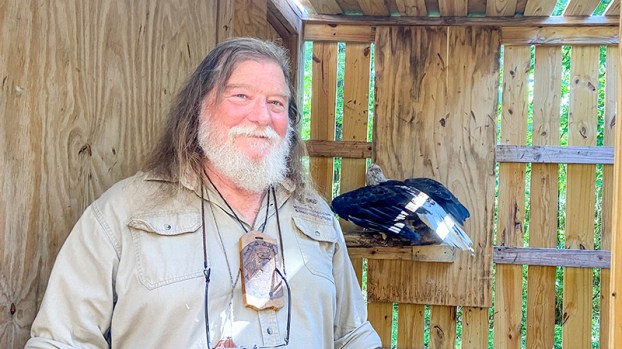 Tommy White stands with Hellena, the first non-releasable bald eagle he could keep.

White owns Alton’s Keep Wildbird Rescue and Rehabilitation Center Inc. and takes in birds of all kinds and helps them to get back to live in the wild. Birds that are not able to live on their own stay at the center as educational ambassadors. Now, White has the permits to keep bald eagles at his center.

“Before now, I would have to take the eagles up to Waynesboro after I worked with them,” said White.

Ever since they broke ground in March 2017, the goal was to expand enough to rehabilitate eagles. For seven years, White has learned how to handle eagles and meet all the requirements to keep eagles on site.

Last year, Alton’s Keep rehabilitated 18 bald eagles during their first full year. Their release rate was 46 percent, which was higher than the national rate of 30 percent.

Getting this permit was much different from others, including 11 months of paperwork and requirements. The eagle also has to be non-releasable to qualify to stay.

Towards the end of 2018, Alton’s Keep got a bald eagle, Hellena. Due to severe head trauma, she was completely blind. Dr. Andrea Leber, a veterinarian who partners with the rehabilitation center, helped restore her sight to 30 percent.

“I named her Hellena after Helen Keller,” said White. “I gave her an extra ‘L’ because she was difficult and fought me at the beginning. She is strong and a fighter.”

Halfway through the process of getting the permit, White got permission to keep her since she could not be released. Starting her training to be an educational ambassador called for a different approach. Hellena needed consistency and routine so she could learn her surroundings.

“It’s like she sees through wax paper,” said White. “She sees shapes and knows where her stuff is as long as we keep it consistently in the same spot.”

Other birds know by visual cues when to fly over to White. However, Hellena knows White’s voice, so when he picks her up on his glove, she calms down, knowing she is safe.

Hellena needs 20 gloved presentations before she can go out for demonstrations. She already had her first one over Zoom for a Boy Scout troop.

“I am very excited,” said White. “My goal is to have kids be able to see and smell them up close.”

The mosquito season has begun, and Suffolk Mosquito Control is working to protect the city from mosquito-transmitted diseases and to... read more