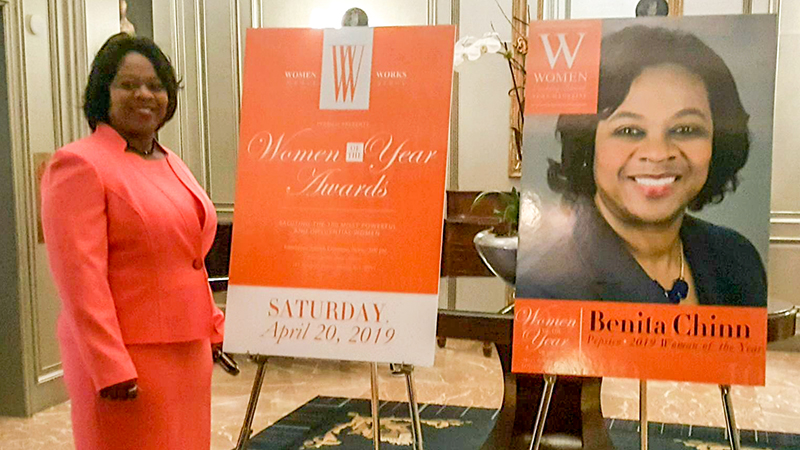 Benita Chinn pauses for a photo at the 2019 Woman of the Year awards. (submitted photo)

Suffolk native Benita Chinn was named Woman of the Year for 2019 by the Works Media Group in Atlanta for the Most Powerful and Influential Woman.

Chinn is the senior director of manufacturing capability and systems for PepsiCo North American Beverages. Her hard work and dedication paved the way for her success in the tough food and beverage industry.

“It is an honor to be recognized as Woman of the Year,” said Chinn. “It is nice to have the chance to tell my journey not as part of a corporation, but as a person.”

Chinn graduated from John F. Kennedy High School in 1985. In the summer of her senior year at Virginia Tech, Chinn got a job as an engineering co-op for Hill’s Bros. Coffee in Suffolk.

“She has always been motivated,” said Bettie Smith, Chinn’s mother. “When she made up her mind, she made sure it would happen. She even became my boss when we both worked at Hill’s Bros. Coffee.”

After Hill’s Bros. Coffee, Chinn moved on to be a process improvement engineer for Quaker Oats in Cedar Rapids, Iowa, in 1995. She then earned her Master of Business Administration from the University of Chicago Graduate School of Business in 2002 and received a promotion to senior operations manager for Gatorade. There, Chinn earned the Supply Chain Leadership Award before becoming the plant director in 2009.

“I want to be an example that hard work, education, good morals, ethics and values can lead to success,” said Chinn.

Chinn never intended to get into the food and beverage business. Her co-op in college opened the door to the industry.

“I now have this unique relationship with the food I see at the grocery store,” said Chinn. “I can pick up a can of coffee and read the code to know where and when it was manufactured and who was on shift. I also get to see how the foods I love and grew up with are made. I find it all fascinating.”

Chinn’s picture was on the cover of Women Looking Ahead magazine in the spring 2020 edition as one of the 13 honorees of the Black Brilliance Award.

“The Black Brilliance Award was a huge honor,” said Chinn. “Brilliance usually relates to some sort of light. Not everyone has a light that shines through everything they do, and I feel lucky enough to have it. I hope people can see it shine even when I am not speaking.”

Despite moving around the country for her job, Chinn recognizes that Suffolk is always a part of who she is. She gives credit to her supportive family and her Christian background, making her the woman she is today. That support gave her “a stable foundation through the good, the bad, and the ugly of life.”

Suffolk’s slow pace helps Chinn enjoy taking time to smell the roses, even when she lives in the big city.

“People are always surprised that I love visiting home, but I always come back so well rested,” said Chinn. “I have lived in six different states, but I never forgot where I came from.”