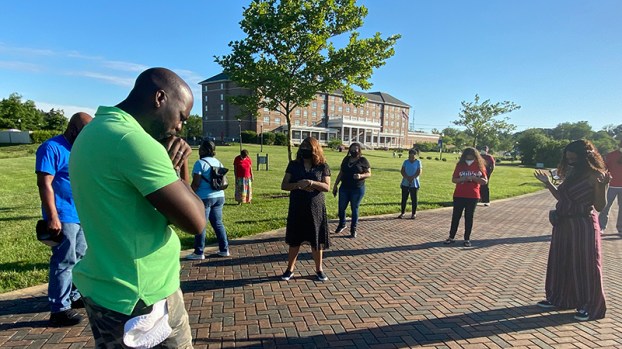 Domenick Epps leads a group in prayer on Saturday.

A prayer for racial unity

A small group gathered to pray at the Constant’s Wharf Park & Marina on Saturday evening.

Domenick Epps called for a 12-hour fast, including a time of prayer and worship, Saturday night in response to the racial tension across the country. More than a dozen people showed to join him in lifting this issue in prayer.

“I just want a time of gathering together for prayer and worship,” said Epps. “No protest, just worship, and whatever the Lord leads.”

At 6 p.m., the group opened in prayer, believing that change will happen. Their gathering would be, as Pastor Andrew Brown prayed, “not lost in hope, but a step forward in faith.”

Epps began by reading 2 Chronicles 7:13-14, reminding the crowd that even though Paul and Silas were only two men, they humbled themselves and called on God who made a difference through them in Acts 16.

Epps also quoted Ephesians 6:12, reminding everyone that the real battle is not physical but spiritual.

“This is not a war won only by legislation, but by the Spirit changing hearts,” said Epps.

A prayer started for healing over the land and the rejection of the spirit of racism. This prayer asked for the nation’s eyes to be opened and see that all people are made in the image of God.

After giving her testimony, Linda Brown encouraged everyone to get out and vote.

“Protesting won’t do anything, you have to go to the polls,” said Brown. “You have to make sure that who we are voting in cares about justice, us, and our children.”

Brown’s husband, Antonio Brown, started a prayer for families. He acknowledged that a building does not define the church, nor does physical DNA connect people, but their spiritual DNA.

Epps led an a cappella singing of the words, “let anointing fall on me.”

“One thing I heard people shouting at protests was ‘I can’t breathe,’” said Epps. “I want us to shout the name of Jesus.”

The crowd yelled the name of Jesus in response.

Another prayer asked God for a release of gifts made for such a time as this. The prayer asked for leaders to raise up like those from history, including Moses, Martin Luther King Jr. and Harriet Tubman.

The gathering ended with one last prayer as the song in the background played the words, “when You walk into the room, things change.” The gathering held onto the reminder of Matthew 18:20 that when two or more gather together, the Lord will be there.