Lakeland’s graduates ‘have come so far’ 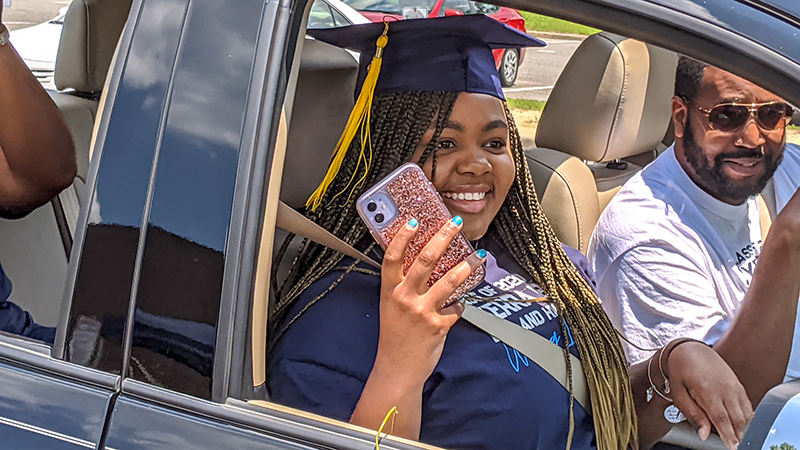 Cyerra Brimm is all smiles as she wears her graduation cap and gets her diploma at Lakeland High School Monday.

With pulsating music from Lil Nas X, Snoop Dogg and Pharrell and more as a backdrop, Lakeland High School students picked up their diplomas Monday during a boisterous sendoff.

With Assistant Principal Dr. Earling Hunter on the mic booming over the music, he greeted students as they came to receive their diplomas — most with smiles and some with tears.

It followed a virtual graduation ceremony broadcast online Saturday, which featured words from Superintendent Dr. John B. Gordon III, along with Principal Douglas Wagoner, salutatorian Shaleah Tolliver and valedictorian Kiara Freeman. There was also a slideshow of graduate photos in their caps and gowns, along with a scrolling of their names at the end.

It replaced the more traditional graduation ceremony that would have taken place at Old Dominion University’s Ted Constant Convocation Center due to the coronavirus pandemic, or what class president Destiny Whitfield referred to as “the rona” during the virtual ceremony.

Wagoner, during the virtual ceremony, said graduates have a world of opportunity ahead of them. He noted the award-winning artists, champion athletes, authors, musicians and poets, as well as students who have sequenced DNA, genetically modified bacteria and conducted research as part of the third cohort of the biomedical program.
“Where some see hopeless problems and conflicts, you have the opportunity to find purpose and pragmatism,” Wagoner said. “While others complain, you have the opportunity to bring about needed reform. While others shirk their responsibilities, your actions can respect the cost of freedom.

“You will have opportunities to bring love where there is hate, cures where there is disease, food to the hungry, hope to the forlorn and action to injustice.”

Destiney Coles, one of nine Lakeland graduates to have already received an associate degree from Paul D. Camp Community College last month, will go to Virginia Commonwealth University in Richmond to major in dental hygiene and become a dentist. She felt she received a lot of support from the community during the pandemic while trying to finish classes virtually.

“It’s like you had to push yourself more because they didn’t give us all that work in school, so they tried to give it to us to be able to graduate,” Coles said.

Gordon, in his virtual address, praised the school’s biomedical program and state champion boys’ basketball team. He told students that life doesn’t stop at graduation and called for them, and all graduates, to represent their families, their school and city to the best of their ability. He said their ability to show resilience, be astute in technology and be leaders “is what it’s all about.”

“We hope that we have prepared you for life,” Gordon said.

Tolliver told graduates during the virtual video that the first verse to Lakeland’s alma mater — We have come so far/To get where we are/Some have gone/Yet we still hold strong/With our heads to the sky/Our faith will never die/Lakeland we sing this song for you — describe the class of 2020 perfectly.

“We have come far, further than previous classes ever imagined,” Tolliver said. “While we all got the privilege of being naïve freshmen, smart-aleck sophomores, excitable juniors and now proud seniors of Lakeland High School, we got one more privilege. We learned how to be victorious.”

Freeman told classmates that most of them were born near the tragedy of the terrorist attacks of Sept. 11, 2001, and now they are in the midst of another in the pandemic, but they were born for greatness.

“We were born between 2001 and 2002 while the nation mourned 9/11,” Freeman said. “But our births had the effect of bringing hope and joy in the world. And here we are now, in the midst of another tragedy, a pandemic. Yet once again, we find a reason to smile and celebrate today, our graduation day. Maybe our generation’s fated to have some of our biggest milestones occur during tragedies. From our births that brought us into this world, to our high school graduation that is bringing us to the gateway to adulthood … everything happens for a reason, and we are light within the world that shows that things can, and will, get better.”

Wagoner said the futures of the class of 2020 are limitless, and they begin now.

“You have all been a vital part of the ‘Lake Show,’” Wagoner said, “and have been #LHSAwesome in so many ways.”

Outside the school Monday, Shiasia Wiggins, who also has already received her associate degree from Paul D. Camp Community College and will attend Virginia Commonwealth University to study accounting, said she wished things had been different, and normal. Still, she said it would not tarnish her accomplishment.

“It’s heartbreaking, because I’m the first in my family to actually get this far,” Wiggins said. “It took away some of the memories I would have had that I could look back on and tell my family in the future. But I made the best out of it, and we’re celebrating the best way we can.”

Tolliver used words from tennis star Serena Williams in telling graduates that “if winning is God’s reward, then losing is how He teaches us.” She said in every year of school, students have been victorious.

“However, in our final hours, we were met with a challenge that we could not ignore,” Tolliver said, “that we could not come to expect. Years of growing and working diligently all for one moment that seemed to have slipped through our fingers. We would no longer get the same experience as every other class. We get a better one.”

She expects the graduates to shine brighter than any other because while they have been hit, they have not been knocked down.

“The class of 2020 as I have come to know them are not ones for taking a seat when it becomes difficult,” Tolliver said. “We might have come into this predicament unknowingly, and we might have been unprepared for it, but we overcame it, and that is something that no other class can bear witness to. We will not simply walk into the world with hopeful hearts. We will walk into the world with bravery, because we as a collective have already been through world-shattering obstacles, and we know that they do not stand a chance.”