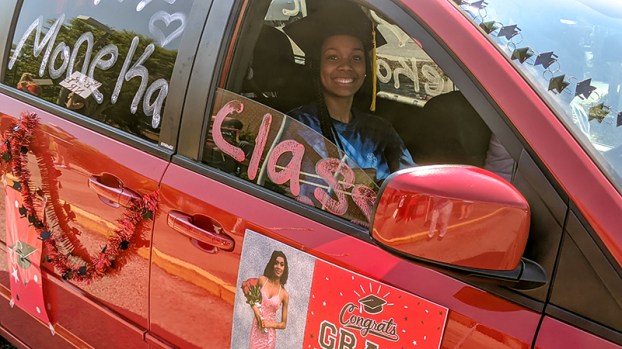 When high school graduates from the class of 2020 look back on their graduation, they will indeed have just cause to say it was a graduation unlike any other.

After the coronavirus pandemic closed city schools in March, no one at the time knew what graduation would look like, and they had to put together virtual learning plans on the fly.

For at least some of the seniors at Nansemond River High School, it was a struggle to motivate themselves to do the work.

But because they ultimately did, they are part of a unique graduating class. And while they didn’t have what would have been the normal graduation ceremony at Old Dominion University’s Ted Constant Convocation Center in Norfolk, they did get to view a video of the ceremony, and they were able to “walk” across a stage, and they received their diplomas and were celebrated for their accomplishments Monday during a drive-through send-off celebration.

Laniya Johnson, who came with parents Carlette Gray and Thaddeus Gray, said the pandemic made her lose focus at first, but she also realized she needed to do the work to graduate. She plans to attend Tidewater Community College and major in business and minor in fashion.

“It was sad, because I didn’t get to see my friends in school anymore, and you take things for granted,” Johnson said. “You don’t realize what you had until it’s gone.”

Noah Fisher, who had just picked up his diploma, said the finish to the year was weird, right down to the virtual graduation video that was originally been posted Saturday, but had technical difficulties. Among them, Fisher said, was the names of Lakeland High School graduates being posted for the Nansemond River video. That has since been fixed.

He said it was difficult not being in school since March and found it hard to focus on schoolwork.

“It was kind of depressing,” said Fisher, who plans to major in business at George Mason University and wants to be a film actor. “I missed my teachers, and I hadn’t seen this guy (pointing next to him to another graduate, Eddie Velez) for three, four months. It was sad, and doing school online, it took a lot of effort to have the motivation to do the work.”

Velez, 16, said the end of the year took a toll on his motivation and described his senior year as “a bummer year.”

“Senior year is already a time where you get unmotivated, but these last four months, it just really went down low, and it took a while for me to get back up and get encouraged to finish my work.”

Principal Daniel O’Leary said the school was able to piece together a ceremony, even if it wasn’t what anyone had envisioned.

“This group of seniors has been a part of me since they were sixth-graders (at John Yeates Middle School),” O’Leary said. “What an exceptional group. They stepped up to the plate when they needed it in March. I mentioned to them that this pandemic didn’t define them. It refined them. It made them better for what they’re going to have to face in the future, and as you see them come through, they get plenty of support.”

During the virtual ceremony, graduates had the chance to hear from several speakers, including O’Leary, School Board Chairwoman Phyllis Byrum, Superintendent Dr. John B. Gordon III, salutatorian Angela Miller and valedictorian Michael Tran.

Photos of graduates in cap-and-gown, with O’Leary in the background, were shown next before O’Leary addressed graduates.

Gordon noted the drive students had to finish out the school year virtually, and in uncertain times.

“The graduating class of 2020 understands what it means to persevere, to have determination and to be remembered as one of the greatest classes in Suffolk Public Schools’ history,” Gordon said, “from the future engineers in the Project Lead the Way program, the future Suffolk Public Schools teachers in our teacher cadet program to our nationally-recognized cheerleaders – we are NR.”

Salutatorian Angela Miller told graduates the current times are so unprecedented for every generation present to support the graduates, and that whatever they are feeling is fine. This will not be the only time in which life feels uncertain.

“Whether your feelings came before or after the virus, it is OK to feel lost,” Miller said. “I feel lost. It is good to feel lost. Uncertainty is a gift, one that forces us to search not for shallow adequacy, but rather, profound purpose. Wade through the fog and let yourself drift through life’s opportunities, because the best thing about life is that tomorrow is uncertain.”

Valedictorian Michael Tran noted the abrupt end to finishing out the school year in person, and switching to a virtual learning platform to finish out high school. He said the pandemic has turned from an inconvenience to a learning experience, telling graduates to use this time of boredom to push oneself to learn new things or refine skills already gained.

“The amazing friends and teachers that have helped to accelerate us through the latter half of our teenage years were snatched from our grasp,” Tran said. “Further, the stay at home orders have destroyed the work ethics and motivations of a majority of students. When there is no tangible goal, where do we go? What are we working towards? And will we even go to college? “Ever since the pandemic, I’ve been struggling with those questions myself. Feelings of isolation and uncertainty got the better of me, and I lost my motivation, my desire to succeed and better myself as a person. But as Ralph Waldo Emerson once said, ‘Make the most of yourself, for that is all there is of you.”

O’Leary told graduates during the virtual ceremony that he had made a promise when he started at Nansemond River four years ago with the class of 2020 to see them graduate. He joked about the memories of students getting locked out of the side doors of the school and waiting in line for a tardy slip, then using the train as an excuse for being late. Students who walked to school, he noted, used that excuse also. He also recalled the academic honors and athletic successes in almost every category.

“It was turning out to be quite a year,” O’Leary said. “No one could have predicted the events that unfolded so quickly this spring. No one could have envisioned finishing your last year of high school using an online video meeting format that was normally reserved for evening chats with your friends, all the while telling your parents you were busy doing homework.

“And even though the events we are going through are unique, so are you. I can think of no other class of students who are as well-equipped to survive, adapt and thrive when given a challenge. You have proven time and time again that you have the will of a Warrior, a strength many may not have realized until they had to.”

Even though the school and the division had to stitch the various parts of graduation together, Velez, 16, who plans to go to Old Dominion University and major in video game design and development — and minor in creative writing — liked it better.

“I think I liked this maybe more than I would have an actual graduation,” Velez said, “because you have to sit there and you have to walk across the stage and then sit and wait more with the long speeches. This is short and to the point and you also get to be standing near friends and not near people (who are) alphabetically near your name.”

Twenty seconds after entering Nansemond-Suffolk Academy for the first time as an eighth-grade student in 1994, Warren Carroll knew something... read more