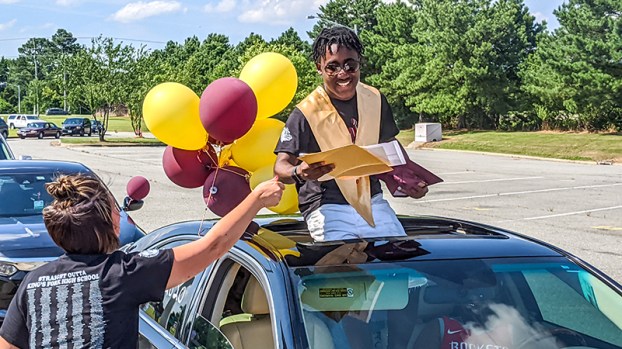 Many of the cars that wrapped around King’s Fork High School Tuesday were decorated for an occasion no member of the class of 2020 could have envisioned when they started their senior years nine months ago.

Having not been in school since March due to the coronavirus pandemic, the now-graduated seniors leaned out of the windows looking for friends, shouting and waving at them. They stood in the sunroofs, taking in the scene — teachers and staff members cheering them on, yelling congratulations, some taking in hugs.

For more than two hours, the line of cars slowly worked their way from the student parking lot, around the front of the school and then to the bus parking lot, where King’s Fork administrators and other staff members were waiting to hand the seniors their diplomas – and a few other goodies too.

“Having a regular graduation would have been good,” said Montez Norman as he sat in the sunroof of a car making its way around the school. “But I like everything that we did. It’s nice. Even though it’s hot, I still like it.”

Norman, who plans to attend Norfolk State University and major in engineering, said the last few months have been a challenge, but he got through his senior year.

“It’s been really chill,” Norman said. “Everybody’s staying at home, keep being safe, because this is the first time that I’m experiencing this. It really hurt my senior year, but I’m still pushing.”

“I actually like this,” Lippard said. “I think this is a better idea than traditional graduation. I feel like it was more fun and everyone has a better time.”

She said it was difficult to motivate herself once school buildings closed in March.

“It’s been boring, for sure, but I guess online school isn’t as bad as anyone really thought it was going to be,” Lippard said. “It was decent, I’d say.”

Lippard has not decided on a college but plans to study cosmetology.

“I think it was definitely hard just not being able to do everything,” Lippard said, “but I think we worked around it enough.”

Todd Gidley, an architect and engineering teacher at King’s Fork, said the abrupt end to the in-person school year was difficult for students. Part of the learning in high school, he said, is learning to socialize. To have that taken away, along with extracurricular activities, and then be confined to home with different responsibilities was hard.

“To be able to have this physical line of being able to get their diploma, and wave to a friend, honk the horn and celebrate closure of the school year, it’s important for a senior,” Gidley said. “It’s the end of a chapter in their life of formal public education. And some will go on to college, and some are working full time, some are going in the military. But to actually finish your high school graduation, your high school career with being able to say goodbye, is really important.”

Before the drive-through celebration and handing out of diplomas, seniors were able to come to school and have their photos taken in their cap and gown, and then a virtual graduation ceremony was streamed live on Suffolk Public Schools’ YouTube page.

In the video, King’s Fork Principal Derrick Bryant said seniors chose to rise to the occasion, embracing online learning, and earning more than $6.7 million in college scholarships. He said students persevered and endured with tenacity, and they have made the school stronger.

As a result, he said the school’s International Baccalaureate program continues to thrive, the boys’ basketball team became state champions, the theater program is growing, and the Mighty Marching Bulldogs are nationally known. The seniors are leaving the school better than it was before they came. He called for them to be the torch that lights their path.

“You did not let fear overtake you, and that is why you are celebrating today at this commencement ceremony,” Bryant said.

Salutatorian Giancarlo Cecchini said he was nervous about giving a speech, so he Googled “how to give a salutatorian speech.” They all said that he was supposed to give an inspiring message or some great call to action.

“I thought to myself that, me, a 17-year-old boy, who doesn’t even know a quarter of his audience, is supposed to inspire 300 students and their way more experienced adult families,” Cecchini said. “And then, on top of that, I’m the guy who got second place. You’re going to have to listen, in two minutes, to someone who’s already more qualified than me. But you know what, Google says it’s my duty, and I’m going to get it done.”

He said the class of 2020 has had many accomplishments, including being the first class to have a virtual graduation.

Valedictorian Kristen Gerton called for graduates to reflect on the past four years — from the first day of ninth grade to the last assignment they completed. She said everyone, no matter what type of classes they completed, put in hard work and dedication toward graduating.

“In fact, the only reason why it’s me standing here giving this speech and not someone else is because of God, who brought me here as part of His divine plan for me,” Gerton said. “I want to applaud everyone, and say to all of you that every assignment, every paper, every late night spent finishing a project, has helped bring you here to this moment.”

Even though many things were taken away from the senior class — things such as prom, senior class trips and saying goodbye to teachers and staff — she said the shutdown and quarantine have added to their experience, and said the class of 2020 should be known as the class of resilience.

“Sure, we won’t have the same, regular trademark memories that all the other classes have before us, but we have new and unique memories that no one else will have — class FaceTime meetings, adapting to (the) new online format, making time to work in the middle of being at home,” Gerton said. “Not to mention, we hold the record for the longest senior skip day ever. The class of 2020 may have come to an unexpected end, but that end has only made us stronger.”

Gidley said he appreciated Suffolk Public Schools for putting together an alternative graduation experience for students at all three of the city’s public high schools that brought people together, even if at a distance.

“Emotionally, I think it’s a great way to say, the end, that chapter of my life over,” Gidley said. “And to be able to start whatever the next chapter is.”

Suffolk Police have arrested a 67-year-old woman after an investigation into an early-morning stabbing. The stabbing was reported at 2:11... read more