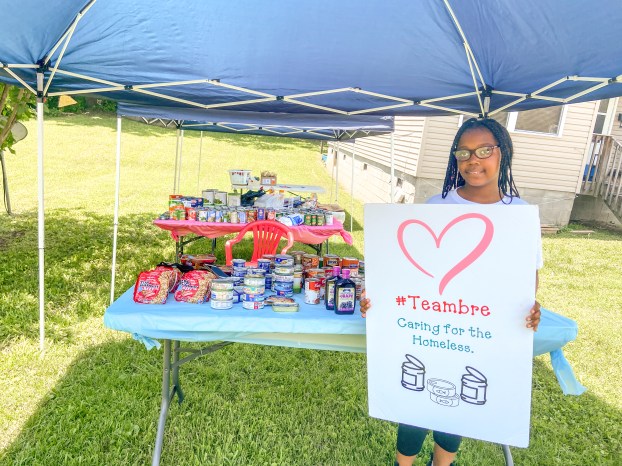 Aubrey Freeman spent her Saturday collecting and donating canned goods to help the homeless in her community.

Caring for the homeless

A local 8-year-old held a food drive on Saturday to help feed the homeless in her community.

Aubrey Freeman attends Mack Benn Jr. Elementary School and wants to help the homeless in Suffolk. Even though she is young, she will not let that stop her from making a difference.

“I wanted to do this because of all the homeless people we have,” said Aubrey. “Since there is all this stuff going on, they can really be in need right now.”

Aubrey had a birthday at the end of May. She approached her mother and told her instead of birthday gifts, she wanted people to donate canned food for her to take to the homeless.

“I am so excited,” said Latoya Savage, Aubrey’s mother. “She is just a bundle of joy and wants to help others. It just makes me feel so good that she is so excited to do this.”

Aubrey set out to donate 100 food items to local homeless shelters. She exceeded that goal by far, winding up with more than 300 food items to give, as well as used clothes and money donations.

“I am so proud of her,” said Laneisha Gainey, Aubrey’s older sister. “To be an 8-year-old and want to do this is great. She had a small goal, and she has surpassed it by so much.”

Aubrey had a tent set up at the end of her driveway on South Sixth Street on Saturday. She had signs, T-shirts, and masks made to support her official hashtag, #Teambre. As people in the community pulled up to make a donation, Aubrey would offer them homemade cookies or banana pudding.

“She has a heart of gold,” said Kim Dolberry, Aubrey’s aunt. “She thought of this all on her own. It is amazing that we can come together and do this.”

This food drive may have been Aubrey’s first big event to help, but last year she had a small lemonade stand. Aubrey has plans to do more helpful events at least once a year, and hopefully closer to every six months.

“I want to help the homeless as much as I can,” said Aubrey. “I just don’t want them to have to go around begging for food and stuff.”

Initial unemployment claims in the Western Tidewater and South Hampton Roads regions continue to decline, according to data from the... read more