Earls ‘couldn’t have asked for a better first year’ 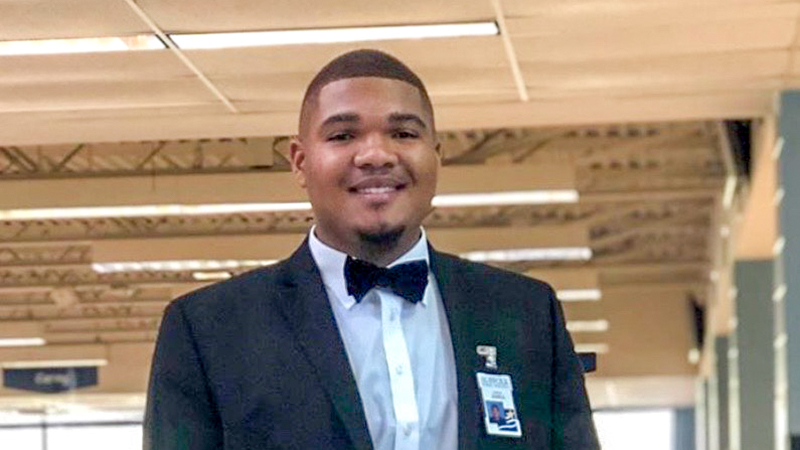 Editor’s Note: We will feature the Suffolk Public Schools teachers of the year in each edition through July 12. We start today with the Rookie Teacher of the Year.

Sahmod Earls has always had a love for agriculture and studied it while he was a student at Lakeland High School under longtime teacher Ronald Daughtrey.

Daughtrey had taught for 29 years at Lakeland, and before that, he taught Earls’ father at then-Forest Glen High School. But when Daughtrey was ready to retire, he wanted someone to continue the agriculture program at Lakeland.

Daughtrey reached out to Earls, who applied for and got the position. And Earls, in his first year of teaching agriculture at Lakeland, has been named Suffolk Public Schools’ Rookie Teacher of the Year.

“He told me that he was going to be retiring, and I thought, ‘OK, well, congratulations on that. I’m sorry to hear it,’” Earls said. “Then he was like, ‘Well, I want you to apply, and I was like, ‘You what?’ So I applied and everything worked out in my favor.”

Earls had not planned on becoming a teacher until he started substitute teaching at Lakeland.

While in college at Virginia State University, he received a call from a Lakeland secretary, who asked if he would be interested in being a substitute teacher. Earls hesitated before learning that a former algebra teacher of his had recommended him.

“Once I did it, I loved it,” Earls said. “I fell in love with doing it, and so I started being a substitute every time I got the chance when I wasn’t in school.”

Growing up, Earls was surrounded by goats, llamas, donkeys, cows, pigs, sheep and other animals — “You name the farm animal and I’ve had it,” Earls said.

Earls said he hasn’t tried to be Daughtrey, but rather take the lessons learned from him, his father, and others and just be himself in the classroom. Those efforts have paid dividends.

“I felt like I needed to be a presence for the upcoming generation,” Earls said. “That came on my heart.”

He said he worked to establish a level of respect with his students from the start. He said over time, after he’s had time with the students, the personal conversations and connections happen.

“It’s been a challenge for me to figure out what my teaching style is going to be, but I can really be only myself throughout the whole situation,” Earls said. “I knew I had huge shoes to fill when it came to being Mr. Daughtrey’s replacement, but I just felt like if I was just myself, then it would work out better for me than me trying to be Mr. Daughtrey or do exactly what Mr. Daughtrey did.”

Lakeland Principal Doug Wagoner describes Earls as a great listener and someone who wants to learn. He recalled Earls’ substitute stints in algebra and biology, noting that he didn’t simply come in to keep a seat warm, but rather made sure he knew the material well enough to teach it to students.

“He doesn’t come in thinking he knows it all,” Wagoner said. “He does go out and ask people questions and just constantly tries to prove his craft, and he’s a really hard worker. He has excellent relationships with the kids, and they love him to death already.”

Wagoner recalled Earls spending time with Daughtrey over the summer before the start of his first year, going over how to operate everything in the shop, how to order supplies and going over safety protocols. During the year, Earls got involved throughout the school also, which to Wagoner signaled that Lakeland was where he wanted to be, and that he wanted to be a part of the school’s family atmosphere.

“Even as a rookie and learning the ropes, he’s just a part of so much, selling tickets for us, running the security wand at the games, and just really a part of the lifeblood of the school.”

He did not expect to earn the Rookie Teacher of the Year honor, thinking that because of the coronavirus pandemic, the division might not give out the awards this year.

“When I found out, I was really in shock, especially because instead of using any of my co-workers or former teachers as those to give me a recommendation,” Earls said, “I used two of my students. So, I asked my students to write their recommendation, because who else would have known what kind of teacher I’ve been except my students?

“I told them, anything that you write, I said it doesn’t matter if it’s good or bad, I just want you to be 100 percent honest. I said it’s going in this folder and it’s going straight to them. Whatever you put in is what I’m going to submit. And apparently what they wrote was great.”

Despite the year getting cut short, Earls said he has had a great first year of teaching, and is preparing for whatever happens in the fall — planning for Zoom-style lectures to provide for some one-on-one interaction, along with virtual labs, in which students would receive virtual lab kits to work on together at home. He had already adjusted to incorporate interactive activities for his students to do, and he’s looking to do more, regardless of what the classroom situation is like in the fall.

“I’ve had so much support at Lakeland between the faculty and staff and administration there,” Earls said. “A lot of them were teachers when I was there (as a student), so I knew them just because of my outgoing personality.”

Earls said it was a different vibe being a full-time teacher as opposed to being a substitute, and said he got help from the school’s administrative team, teachers and the rest of the school’s staff.

“Anytime I had a question, they would stop what they were doing to help me get it figured out, or they would say look, let’s get this when school lets out and we’ll go ahead and get this situated,” Earls said. “And literally, they would walk me through any task that I needed to complete, tell me what I needed to do, not do it for me but show me how it needs to be done and why it needs to be done. Honestly, my first year, I couldn’t have asked for a better year.”