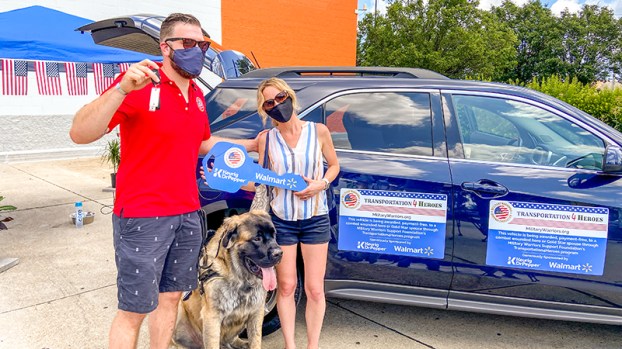 Sanford applied for a car through the Military Warriors Support Foundation’s Transporation4Heroes program. Due to injuries from his deployment to Afghanistan in 2011, his present car was not accommodating his needs.

“Military Warriors reached out, and they wanted to bless me and my family with a brand-new vehicle, payment free, to basically just change our lives. It will help us with day-to-day struggles of just going to visit family and going to the doctors and just making it.”

Along with the vehicle, the Military Warriors Support Foundation will provide Sanford with one year of family and financial mentorship. The mentorship is also sponsored by Keurig Dr Pepper and their retail partner, Walmart.

“We do this mentorship, so they are never alone,” said Ken Eakes, executive director at Military Warriors Support Foundation. “We want to give one more resource for military families to help them out.”

Keurig Dr Pepper is located in Windsor and was able to help with support from their local bottler, Canada Dry, in Norfolk.

“We bring this program to Walmart because of their hiring practices and their support of veterans, and we appreciate that,” said Dave Nowak, sales execution manager at Keurig Dr Pepper. “We are just humbled to be a part of this and give back to the military.”

With so many companies and organizations coming together to help a wounded veteran, Sanford and his wife were overwhelmed by the generosity.

“We can’t thank the people enough who had a hand in this, Military Warriors Support Foundation, Keurig Dr Pepper, Walmart, and everyone who had a piece to do with this,” said Sanford. “Not just for me but all the warriors behind me donating cars and everything that these organizations do for combat-wounded veterans.

“I would make the sacrifice again in a heartbeat. I would serve my country 100 times over, because there are good American people who appreciate it when we come together.”

The car’s real test was when Abe, Sanford’s service dog, climbed in the back of the new vehicle and happily laid down.

“I love it,” said Jessie Sanford, Luke Sanford’s wife. “This will be so good to have when we start a family, and we will have room for them and Abe. Everyone is happy.”

Sanford received the Purple Heart for being wounded supporting combat operations, and a Combat Action Ribbon for being in direct combat with an enemy force. He was injured by an IED during his deployment in Afghanistan.

“I don’t know what to say,” said Luke Sanford. “We are at a loss for words and just so appreciative.”

Suffolk Sister Cities International is an organization with a goal to unite the world through personal connections, and will not... read more