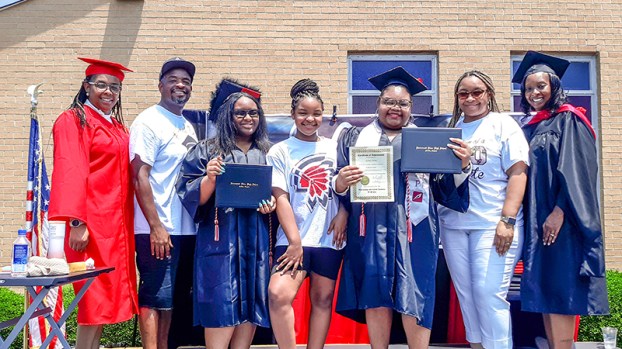 A special ceremony for sisters, grads

More than 50 friends and family came out to a parking-lot graduation ceremony for two Nansemond River High School graduates on June 27.

The ceremony for sisters Amari and Aariya Davis-Driver took place in the parking lot for New Hope Baptist Church in Pughsville. Unlike a typical graduation, they got to have their cousins, younger sister and parents deliver speeches and had dozens of their favorite people in attendance. Most of those in attendance watched from inside or near their vehicles, and those sitting in front of the stage were spread out in chairs.

It was especially meaningful for Amari, who missed almost her entire senior year in school thanks first to a traumatic injury, and then the pandemic.

She was on the homebound program for most of the year due to a knee injury that resulted in several surgeries. Once she was finally able to go back to school, she was there only about two weeks before schools were closed because of the pandemic.

“I was really looking forward to prom,” Amari said.

Aariya added that the pandemic was an obstacle.

“We were looking forward to so much for our senior year: senior campout, prom, graduation,” she said. “But we’re blessed, because they are doing all of this for us.”

The graduation included a speech from one of their NRHS teachers, Candace Credle.

“When I think about the class of 2020, two words come to mind: strength and perseverance,” Credle said. “You had the strength to stay the course and persevere during uncharted times. As a result, you are here today to celebrate a major milestone. It may not be the traditional celebration you were expecting, but it’s one you will never forget.”

The graduates’ parents, Dominic Driver and Bronte Davis-Driver, spoke during the ceremony, as did their 11-year-old sister, Asia Davis-Driver.

“We can’t wait to see what the future has to offer,” Dominic Driver said.

“Going into your next chapter, always show up as your best self, full of confidence and grace,” Bronte Davis-Driver said.

Bronte Davis-Driver said Friday that the ceremony was meaningful for her daughters.

“It was just a moment for them to get, not the full graduation, but in a sense get something that was special for them,” she said.

“We didn’t get to have the experience as actual graduates, but it was really great for our parents and our friends and our family to put it together for us,” she said.

“It was great,” she said. “It was actually better than the actual graduation we were supposed to have. We were grateful our family took the time to put that together for us. It made it really special for us.”

Both graduates plan to attend Tidewater Community College and then transfer to four-year universities. Amari will attend Hampton University to study sports medicine, and Aariya will attend Norfolk State University for business management.

More city parents support a hybrid back-to-school option for the fall that would provide for four days of instruction per... read more