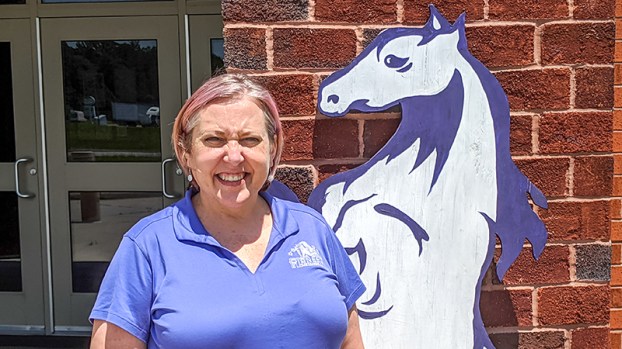 Gwendolyn Mann was named elementary teacher of the year for Suffolk Public Schools. She is a proud member of the Pioneer Elementary School Mustangs.

When Gwendolyn Mann found out she had been named Suffolk Public Schools’ Elementary Teacher of the Year, the Pioneer Elementary School second grade teacher was waiting for a Zoom call to take place.

Mann’s principal, Lori Mounie, said the Zoom call was a cover to surprise Mann at her home with the news. Mounie needed to know Mann would be there so she and assistant principal Dr. Janet Wright could present her with the award and flowers.

“We wanted to make it as special as we could,” Mounie said.

“And it was,” Mann replied.

Mann, who has been teaching for 11 years and has taught at Pioneer for the past four years, described her approach to teaching second graders.

“I always try to build a rapport with my kids, so I know what their likes and dislikes are, their strengths and weaknesses,” Mann said, “and I just tried to make it so that I reached all the different modalities of learning. But I try to make it as engaging as possible.

“I think of what I would want to do if I was a second-grader, or how would I want my own children’s classroom to look like, and so I just kind of model my room after that.”

Mann said her teaching has evolved over the past 11 years, and she doesn’t shy away from trying different things in an effort to teach her students.

“I’ve definitely gone to more engaging, and getting up and moving around, versus at the beginning, it was, sit down and let’s get this done and quiet,” Mann said. “I like to call it controlled chaos.”

If one was to walk by Mann’s classroom at any given point, it would have likely been noisy, but with the students engaged and working.

Mann said she lets her students first come up with solutions on their own before facilitating conversations, group work and allowing them to solve whatever problem they are working on.

“I usually like to show … by example,” Mann said. “I always have an open door, so anybody can always come in and even observe and see what it’s like in there and watch just a few minutes, seeing how the kids are actually processing the information.”

Mounie said Mann is successful at differentiating instruction for each child in her class, especially important in an inclusion classroom such as Mann’s in which every student is at a different level of learning.

“She does that with a lot of small group instruction, keeping them engaged, having them excited about learning,” Mounie said. “Worksheets aren’t going to get it anymore. It really doesn’t. It’s not active learning, and she has that active learning going on.

“When I go into her room, they’re either singing a song to memorize or remember something, they’re dressed as doctors to do surgery on sentences and contractions, just all sorts of engaging activities.”

Mann said she began to teach this way after realizing that the method was effective in teaching a subject that had been her weakness — math.

“It’s not one size fits all,” Mann said. “You have to meet them where they’re at.”

Whole group lessons last about 10 minutes in Mann’s class, and then everything else is broken down into groups based on their ability level. When she’s not meeting with a group, they are working on something else at their level — working at a technology center or something hands-on.

“All of my groups are different,” Mann said. “They all look different. They have different activities, stories, different methods that I use in each one.”

She said the last day she saw her students in person before schools closed for the year due to the coronavirus pandemic was a tough one.

“The last day that I was here with the kids,” Mann said, “it was very bittersweet and very sad.”

She held a lot of Zoom video calls with her students and assigned i-Learn lessons based on their needs and skills. She also stayed in touch with parents to provide any needed information for them, or to provide them with more work for their child.

Many of her students requested one-on-one FaceTime or Zoom video chats with Mann. Though it was difficult to reach all of her class to teach them and talk to them at the same time, she stayed in frequent contact with all of them throughout the rest of the school year, knowing they were going through a difficult time.

“From what I’ve heard from my parents, they’ve taken it very hard,” Mann said.

Mounie touted Mann’s love of professional development as one of her key strengths.

“She’s also a great resource to other teachers,” Mounie said. “She would model lessons if need be. Other teachers could go in and observe. But knowing that you have a teacher of this caliber, it’s amazing, and we all learn from each other. … She always wants to grow and learn.”

But above and beyond those things, Mann displays another characteristic that Mounie loves.

“She teaches with heart,” Mounie said. “And she would do anything to meet the needs of her kids, whether it’s constantly researching what they need, planning meaningful lessons, engaging lessons. They’re very lucky to get Ms. Mann, very fortunate.”