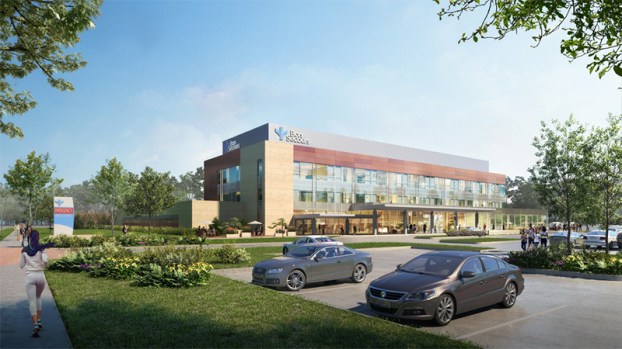 A rendering of the planned Bon Secours Harbour View Hospital.

Growth, coupled with the growing need for hospital services in North Suffolk, are the drivers behind plans by Bon Secours to expand its hospital in Harbour View.

Bon Secours filed a request for a Certificate of Public Need July 1 with the Virginia Department of Health requesting to increase bed capacity at Harbour View Hospital through relocating up to 36 acute care beds from its DePaul Medical Center in Norfolk, including up to 12 obstetrical/gynecological beds and neonatal services, up to eight intensive care beds and up to 16 medical/surgical beds. The 18 beds from the original Certificate of Public Need that was approved in December 2018 will be relocated from its Maryview Medical Center in Portsmouth. A decision on Bon Secours’ new Certificate of Public Need is expected from State Health Commissioner Dr. Norman Oliver in December.

The Harbour View Hospital project is projected to be 142,194 square feet after adding the newly proposed 67,000 square feet. When Bon Secours announced its plans for a new hospital in 2018, the company said it expected to invest about $77 million to build a 75,000-square-foot, two-story facility. Bon Secours did not indicate this week how much more it would be investing.

“Since 1999, when the Bon Secours Health Center at Harbour View was built, Bon Secours has been committed to finding innovative ways of serving the growing health care needs of the Western Hampton Roads community,” Kate Brinn, president of Bon Secours Maryview Medical Center and Bon Secours Harbour View Medical Campus, said in a statement. “This expansion would help us meet the growing demand for in-patient services and allow for more flexibility in patient placement, bring much needed obstetrical services to the area and ensure that we are prepared to handle any potential surge in patient volume well into the future.”

The bed expansion at Harbour View Hospital would increase its licensed capacity to up to 54 total beds and also include plans for four general purpose operating rooms, relocate the Harbour View emergency department and allow it to add a full kitchen and dining area, sterile processing, a nursery and cesarean section room, along with expanding other support services that could include waiting rooms and registration.

In recent years, both Bon Secours and Sentara have been expanding their services in the city and region.

Sentara, which was denied a Certificate of Public Need for a new North Suffolk hospital with 24 acute-care beds in 2018, did open an ambulatory surgery center on its BelleHarbour campus, and last year.

Sentara Obici Hospital earlier this year announced a $13 million expansion of its emergency department, as emergency room visits there have been above its 40,000 patient-per-year capacity for nearly 10 years. That expansion, which will increase its ER size to 20,000 square feet, and its capacity to 73,000 patients per year when finished, began in February and is expected to take until about the end of 2021.

The increase in ER visits to Obici has come in spite of an increase in the city’s urgent care facilities and the expansion of the ER at Sentara Belleharbour, which served about 26,000 patients in 2019.

Sentara Healthcare opened a $33.5 million, 100,000-plus square-foot expansion and renovation of its BelleHarbour campus outpatient medical center in March 2019. Besides the expanded 24-hour emergency department, it added an ambulatory surgery center, new observation beds for overnight stays, a new helipad for Nightingale and new office spaces for medical practices.

Dr. Steve Julian, then president of Sentara Obici Hospital, said at the time the Belleharbour expansion opened that the next step would be to bring a micro-hospital to that site, which was built hospital ready, as the new addition has two additional floors shelled in — 20,000 square feet on each floor to put 20 hospital beds on each floor.

As part of the company’s master facilities plan, he said there could be another four-story building on the campus that would have 24 beds per story, and that within two to three years, he expects to get a Certificate of Public Need from the state health department for the additional hospital beds.

When Gwendolyn Mann found out she had been named Suffolk Public Schools’ Elementary Teacher of the Year, the Pioneer Elementary... read more