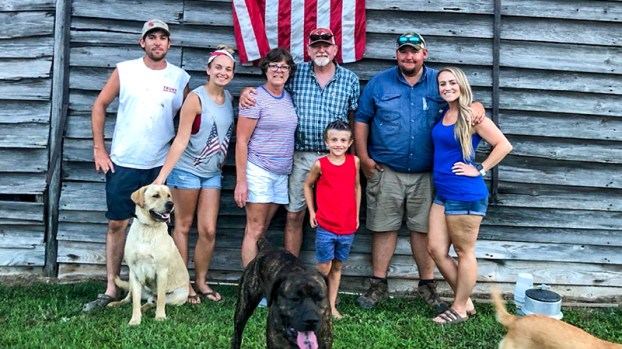 David Bosselman and his family on their farm on July 4 with their four dogs. (submitted photo)

A challenging year for farmers

The unpredictable weather this year has posed a challenge for local farmers.

The year 2020 has brought challenges of all kinds for all people. The topsy-turvy weather pattern has left the local crops either behind, drowned or fried, and the ongoing coronavirus pandemic is also affecting the markets for the crops.

Local farmers Shelley Barlow and David Bosselman have given similar reports on this peculiar farming season from different sides of Suffolk.

Bosselman has a farm off Old Myrtle Road that has experienced one of the most challenging years he has ever encountered.

“This weather has just gone to one extreme to another,” said Bosselman. “The spring was too cold and wet to plant, and now the heat has come and made everything too dry.”

The spring started so cold and wet that farmers had to delay planting. Then once they were finally able to plant, the low-lying areas got drowned out. Once the summer heat set in, the crops started to dry up.

Barlow hoped that the heat would dry out some of her cotton and other crops that were too wet. Once the 90-degree temperatures set in, the crops started to get too dry.

“Now that it is hot and dry, there are some serious concerns,” said Barlow. “Some of the corn has become dried out and twisted. It seems like no matter what the weather, you wish the opposite was happening.”

Bosselman expressed the same concern for his corn, which he described as “burned up.”

With delayed planting, the harvest this fall will be delayed as well. Bosselman stated that he is usually ready to pick corn on July 4, but this year it looks like it will be closer to August.

“I’m not sure what fall will look like,” said Bosselman. “I am hoping everything won’t be behind as it looks.”

Barlow owns a farm in Chuckatuck that grows soybeans, wheat, and corn. She noted that her soybeans look okay. She is neither excited nor concerned about their progress.

“If we have good weather from here out, we should get an average harvest,” said Barlow. “That’s never something to hope for, but we weren’t expecting bumper crops this year either. There’s still some potential that things will turn out OK.”

With COVID-19 affecting the markets, farmers this year do not expect a significant profit from what manages to grow this year.

“We planted this year knowing it was at a loss,” said Bosselman. “But, that’s how we make a living. That’s also how we feed and clothe our country.”

Despite the questionable outlook, Barlow is trying her best to stay positive.

“Everything this year has been a challenge it seems like,” said Barlow. “I am trying hard not to be negative, because we are all in the same boat right now facing something. It’s all about keeping perspective.”

Citing concerns with traffic and impacts on properties and schools, the Planning Commission voted 5-3 against recommending rezoning property for... read more