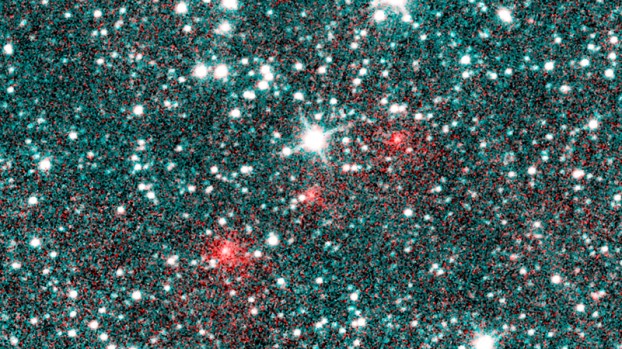 The NEOWISE mission caught multiple exposures of the comet on March 27 as red dots across the stars. (University of Arizona photo)

Suffolk residents can see Comet NEOWISE through the middle of August.

The University of Arizona and the Jet Propulsion Laboratory and California Institute of Technology have studied the comet that is making a relatively close approach to Earth.

Comet NEOWISE approached the sun on July 3 in a once-in-a-lifetime event. As the comet crosses outside Earth’s orbit, it will be visible to the naked eye through the middle of August.

“The main thing is to look up the time the sun rises, and the visibility window will be 60 to 40 minutes before that,” said Amy Mainzer, a principal investigator of NASA’s Near-Earth Object Wide-field Infrared Survey Explorer.

The NEOWISE spacecraft was the first to discover the comet and give its name on March 27. The comet will be visible right before sunrise through July 11. After that, it will be visible just after sunset under Ursa Major, the constellation that includes the Big Dipper.

“The comet is a really large one, at 5 kilometers across. Part of the reason we think it’s so bright is because it was big enough to survive a very close passage by the Sun without getting torn apart,” said Mainzer.

When the comet passed by the sun, the sun heated its outermost layers of gas and dust. This made a trail of debris that is now burning as a large tail and “natural fireworks display,” according to the University of Arizona.

The central core of the comet can be easily seen in the dark skies. To get a good look at the comet and its tail, the viewer will need binoculars.  Due to its closeness to the sun, it is only visible at certain times right before sunrise and then after sunset after July 11.

This comet has been viewed worldwide and even by the astronauts on the International Space Station.

A challenging year for farmers

The unpredictable weather this year has posed a challenge for local farmers. The year 2020 has brought challenges of all... read more