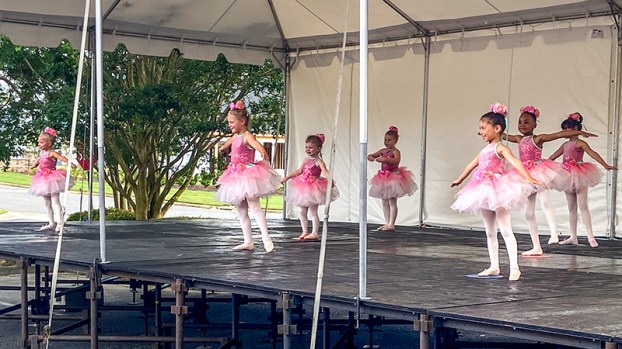 Wednesday age four to five ballet class performs “All In the Golden Afternoon” by Diana Panton.

Dancing together and separate

Dynamic Movements held its annual dance recital outdoors in their parking lot this year due to the COVID-19 pandemic.

Dynamic Movements celebrated the end of its 16th season with the outside recital. In March, the dancers received their costumes and started to learn their dances for their recital. But like many other things, COVID-19 stopped them from meeting.

Owner Kristen Burgess and her team of instructors came together to make sure their dancers could still get the recital they deserve.

“We wanted them to have the chance to wear the costumes they purchased and show what they learned this year,” said Burgess. “They needed some kind of reward for their hard work and dedication.”

For the next four months, dance students would tune in to their dance classes on Zoom. Since they still had to keep their distance on stage, the routines were altered to limit contact. The recital theme changed from “Dancing Through the Seasons” to “Dancing Together and Separate, We are Strong.”

The recital has been held at Harrison Opera House in past years. This year, the stage was in their parking lot.

“We perform on stages like this at Peanut Fest and county fairs,” said Burgess. “This lets them be able to perform in a safe environment and invite who they wanted to.”

There were eight classes performing each day this week. These classes ranged from 2-year-olds to adults.

Each class had a 20-minute time slot. The dancers would enter the studio and stand on spaced out dots through the rooms. First, they would get their picture taken before lining up outside, ready to perform. Once they performed, the dancers left with their families. This gave each class a chance to invite who they wanted and still not be overcrowded.

Peyton wore a special shirt made for this season. On the front, it read “DM Dancer Strong.” On the back, “The studio was closed, competitions were canceled, and we made our comeback bigger than our set back. #DMFamily.”

Peyton has been dancing with Dynamic Movements for six years. She does a little bit of all types of dancing, including tap, jazz, ballet and contemporary. Her performance was at the end of the week, along with her brother and sister.

“As a parent, I commend the staff for they have done,” said Peyton’s mother, Kimberly Rossler. “It has given them a piece of normalcy in all of this. I know it wasn’t easy for them to do rehearsals on Zoom.”

Rossler and Burgess noted that this new setup was fun and different. Future recitals are planned to be inside as usual. However, fundraisers or other events may look similar once restrictions start to relax again.

“We look forward to starting our 17th season next week,” said Burgess. “We are hoping that we can go back to a regular schedule in the fall.”

No injuries in crash

There were no injuries in a two-vehicle accident downtown on Wednesday evening. The crash was reported shortly before 8 p.m.... read more