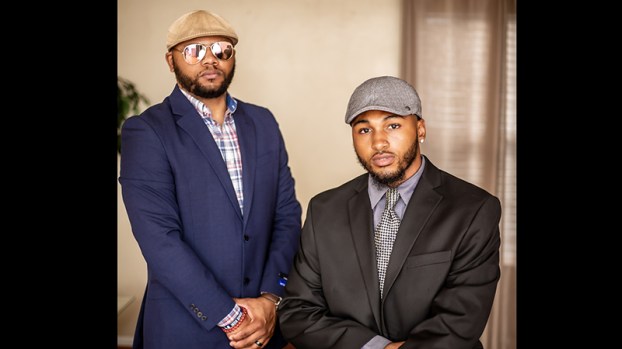 Keon Wiggins-Saunders with his stepfather, Donzell Powell, whom he asked to adopt him on Father’s Day. (submitted photo)

A local teen went viral last month after posting a tear-jerking video of himself asking the man who has raised him to legally adopt him on Father’s Day.

The video by Keon Wiggins-Saunders received more than five million views in a matter of days.

Wiggins-Saunders is a 2020 graduate of Lakeland High School. When he was 1 year old, his mother married Donzell Powell. Powell has been a constant in Wiggins-Saunders’ life.

“I felt like this video was the only way I could pay homage to the man that has been in my life since I was a baby,” said Wiggins-Saunders. “Having him legally adopt me and take his name is the best way to give him credit for the man he created.”

Wiggins-Saunders had his sister video him reading his letter to document the event. He wanted to save this moment for his family to look back on and remember. After posting it to Instagram, he never expected it to get so many views.

The video on Wiggins-Saunders’ personal account started gaining thousands of views. Accounts such as The Shade Room and Hollywood Unlocked asked to re-post it, earning it more and more views. Wiggins-Saunders’ story is now being shared on Whole Brother Mission Podcast, Atlanta Black Star and Newsflare.

The video included Wiggins-Saunders reading a letter he wrote to Powell asking him to adopt him. He gets emotional while reading all the reasons he is thankful to have Powell in his life and his influence. Powell responded with an equally emotional hug and an obvious yes.

“Displaying that much emotion in public bothered me at first,” said Wiggins-Saunders. “People keep telling me that I showed a side of masculinity that most are afraid to show. So, it doesn’t bother me now, and I’m glad I could show that side.”

After the video exploded, Wiggins-Saunders says that life has stayed the same. The experience has humbled him and his family. The main thing that changed for him is that he is getting more attention for his clothing brand “Rich Kid Nation.”

“It’s nice that even people that knew me before are hearing my story and my accomplishments,” said Wiggins-Saunders.

Wiggins-Saunders plans on taking Powell’s last name, but he is not sure how since he already has two.

“I still have siblings on my dad’s side, so I don’t want to exclude them by dropping his name,” said Wiggins-Saunders. “I don’t know what I’m going to do yet. I might just have three last names.”