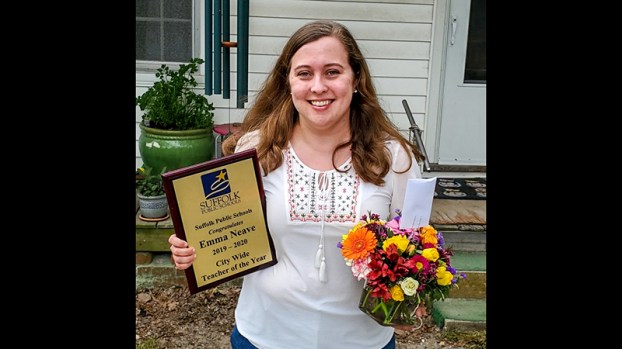 ‘Magic in the classroom’

Citywide teacher of the year awarded

Emma Neave has never thought of herself as an outstanding teacher.

So when Neave, an eighth-grade English teacher at John F. Kennedy Middle School, received Suffolk Public Schools’ Citywide Teacher of the Year Award, it felt odd to her.

She said if then-principal Bryan Thrift had not called ahead of time, she likely would have still been in pajamas in the afternoon when he came by her Southampton County home to present her with the award.

“It’s the only thing I’ve ever wanted to do since I was a little kid,” Neave said.

When she got to high school, Neave said helping other students with their English gave her a stronger idea that she could teach for a career.

Neave, who just finished her seventh year at John F. Kennedy, started out teaching seventh-grade English for three years before moving up a grade level. She also serves on the school’s curriculum writing team.

“She’s a younger teacher with a lot of talent,” Thrift said. “I’m sure that’s probably why she was a little surprised. But she’s dynamite. I mean, really understands all the aspects of teaching. And she’s a teacher-leader in the building for us, and for the district.”

Thrift said Neave takes initiative to grow at her craft and is a reflective and introspective teacher. He said when he first got to John F. Kennedy, writing scores were low, and one of those he asked to work on solutions to improve them was Neave.

He said the fact the school is fully accredited can be attributed, in part, to Neave creating common ways to teach throughout the school.
“Doing the curriculum writing and unpacking the standards is big,” Thrift said, “because once you understand what you’re teaching, now you can focus on how you’re going to teach it.”

Originally, she had wanted to teach at the high school level, but her first job offer out of college came at the middle school, so she took it.

“I never saw myself as a middle school teacher,” Neave said. “Never. That first year was a challenge. Middle schoolers, everyone thinks carry a lot of drama, and they are, but there’s also something beautiful about that. They’re so passionate and they give their all to everything. Middle school, they’re just passing through and trying to figure themselves out, so you never really know if you’re making a difference or not.”

It’s when those students reach high school and come back to visit, send emails or see Neave at Walmart that she learns what a difference she has made.

Reaching them starts the first day they are in her class, giving them learning-style assessments, using those to plan. Many of her students are kinesthetic learners, meaning they learn through physical activity rather than absorbing material through teacher lectures or watching demonstrations.

“A lot of my stuff is discussion-based, because as an English teacher, I want to make sure that they can be better interpreters of information,” Neave said, “and also, better communicators. They don’t always love to write, but they love to talk, so if you can harness that, that’s the best and most effective way that I’ve found.”

Neave has a special education co-teacher, and they tag-team teach in groups to meet students at their reading and writing levels.

“It’s not just her with the special ed kids or me with the regular ed kids,” Neave said. “We mix it up. We’re not afraid to get in there and try anything we can.”

In particular, since eighth grade is the first time students take a writing Standards of Learning test, she focuses heavily on that to give them a firm foundation to write essays and work on grammar and spelling. She also works on their skills with conducting valid research and interpreting their findings, while they learn how to compare and contrast texts such as poems with non-fiction articles and brochures and technical materials with a short story, building on previously-learned skills.

Over her teaching career, Neave has become more adaptable and empathetic, realizing that what works in reaching some students will not work for others.

“These kids, we need to address the social and emotional issues before we can address the academic issues,” Neave said. “That’s probably my biggest thing. because a kid can’t learn if they’re hungry or if they didn’t sleep last night. Over the years, I’ve really come to understand that.

“Sometimes, these days, you just have to start the class with, ‘All right, what’s going on? Talk to me. Tell me what you’re frustrated about.’ I used to describe it as, ‘let’s build a bridge and get over it,’ so we can get past whatever that is that’s blocking learning for the day.”

Thrift calls it the biggest tool in Neave’s toolkit — “it’s like magic in the classroom.”

“She builds excellent relationships with the kids, which fosters that environment in the classroom where all the kids feel comfortable talking,” Thrift said, “because let’s just be for real. In middle school, in eighth grade, if you’re not a confident kid, you’re not going to talk in the classroom, and she wipes all that away, creates a level playing field for all the kids so everyone feels comfortable.”

Another thing she’s learned over her years of teaching: she can have fun with the kids and still teach them, too. They’ve also learned that hard work pays off.

“One thing that’s always stuck with me is when a kid told me, ‘This class can be lit if we get our work done. … Once we get the work done, then we can have the fun.’”

Neave describes it as a good lesson to learn at age 13.

She also wants to empower them and show they have a voice, and that it can be a powerful one.

“Their voice and their words matter,” Neave said. “And you were given this voice to share with the world whether it’s through your writing or your speaking, and that voice deserves to be valued and heard.”

Her students, she said, were scared on the last day school met in person back in March, even if they were trying not to show it. They had a lot of questions about COVID-19, and whether they would get to go back to school. Neave, who lives at home with her parents and taught her virtual lessons from there, missed having the opportunity to cheer on her students in extracurricular activities and spend more time with them.

“They had a lot of questions, and at the same time, I’m scared too,” Neave said, “because, I don’t know. Am I going to see kids again? Are schools going to close?”

She kept telling them that she loved them, but because of the virus, there would be no hugs, only air high fives, air fist bumps. While they made the best of virtual learning, she said an email or video could not replace human interaction or feel a child’s heart.

“We didn’t hug because of everything, but I wish I had taken the time to hug each one of them,” Neave said, “because I didn’t know that we weren’t going to get the end of the year together. This is a really special time when you have the kids, because they’re getting excited about moving on to high school, and celebrate everything they’ve done. And we didn’t get that.”

It cuts to the heart of why Thrift believes Neave deserved the city-wide teacher of the year honor.

“Above all, she’s just a very good person,” Thrift said. “And I think that translates right into the classroom. She’s a good, loving person, and that has, probably, a lot to do with the way she was raised and all those things … and she would do whatever she can for her kids.”

On the eve of a scheduled court hearing involving a member of the Suffolk School Board’s dispute with the rest... read more