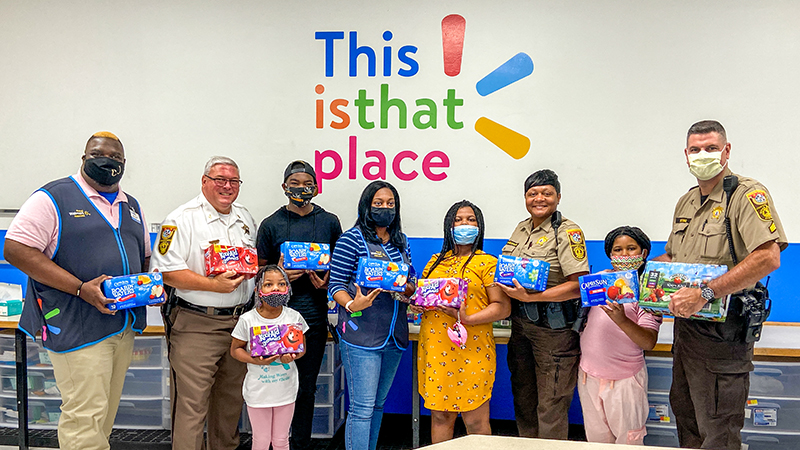 The Suffolk Sheriff’s Office recently gave out juice boxes to kick off its new community initiative.

Operation Juice Box is a non-profit organization in more than 11 states nationwide. Its goal is to strengthen relationships between law enforcement and the community they serve.

“This was nice of them to start this,” said Porter. “They really love these juice boxes.”

When asked if they were excited, London and Joselyn just nodded as they continued to drink their juice pouch.

“The juice is like an ice breaker,” said Sheriff E.C. Harris. “When we see youth outside during the summer, we can engage them in conversation and daily build trust with the community.”

Operation Juice Box’s headquarters is in California. Getting juice box donations from the source across the country proved to be inefficient. This was when Walmart, a longtime partner of the Sheriff’s Office, stepped in.

Shonda Hill has been the store manager at Suffolk’s North Main Street location for eight years. She has partnered with the Sheriff’s Office in its other community engagements. When they needed help, Walmart donated 500 individual juice boxes and will continue as their local sponsor.

“This is an awesome opportunity for sheriff officers to connect with kids in Suffolk,” said Hill. “They already give back a lot with their toy drives and other events. It’s great to see them do more, especially in this pandemic. It’s also breaking down barriers for both kids and parents. Helping to ease some tension with what’s going on right now.”

Sheriff Harris noted that a quote from Helen Walton parallels Walmart’s mission statement and the Sheriff’s Office. “It is not what you gather, but what you scatter, that tells the kind of life you have lived.”

The Sheriff’s Office gives back to the community throughout the year, including toy and school supply drives. With COVID-19, the office has not had the chance it wanted to make connections. Handing out the juice boxes gives them an opportunity to makes these connections in a safe manner.

For more information on how to get involved with Operation Juice Box, visit operationjuicebox.org.