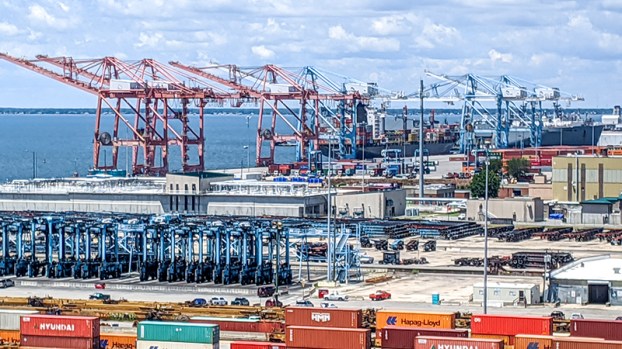 The money will also be applied at Richmond Marine Terminal to deploy all-electric yard tractors and charging infrastructure there, using that as a testing ground to possibly use at other terminals in Hampton Roads.

Gov. Ralph Northam, at NIT with port Chief Executive Officer and Executive Director John Reinhart for the July 10 announcement, called it “a significant step forward for the state’s economy and the environment.”

“The Port of Virginia is an important economic driver for our state and a critical player in our transportation system,” Northam said.

The state’s portion of the money comes from its $93.6 million settlement in 2017 with Volkswagen, with it coming out of the Volkswagen Environmental Mitigation Trust. That came out of the company’s violations of the Virginia Consumer Protection Act, related to its marketing, advertising, distribution, sale and lease of diesel passenger vehicles that had software set up to get around federal or state emissions standards.

Reinhart outlined a number of port initiatives to reduce emissions, including the addition of 26 new truck lanes to reduce idling and speed up traffic going in and out of the terminals. More than 480 trucks, through the Green Operator Program, have been retrofitted to be cleaner and more environmentally friendly, and it has replaced aging diesel cargo handling vehicles with hybrid shuttles.

A barge service between Hampton Roads and Richmond has also reduced truck traffic by about 45,000 on Interstate 64 between the two areas, saving 20 percent on emissions, Reinhart said, while using electric cranes will reduce by 75,000 gallons the amount of diesel fuel used every year.

“The port is trying to be holistic in its approach on how we move freight, move the economy of Virginia, but do it responsibly,” Reinhart said, “and do it in an environmentally friendly way.”

NIT, located on more than 550 acres along the Elizabeth and Lafayette rivers, has 14 ship-to-shore cranes now, and according to Reinhart, is expected to receive two more cranes late this year. The new cranes just announced would likely be ordered in the fall and come to the port about 18 months later.

“Then you can put three, ultra-large container ships along the berth at one time,” Reinhart said. “And you can work with four or five cranes apiece.”

Combined with deep channels that can handle the largest of the world’s ships, the tall cranes that can handle 10 containers above and below deck like some it has already, it will allow the port to speed up the turnaround times to get ships in and out of the port more quickly.

In switching over to electric versus diesel, the port has spent upwards of $800 million — with help from the state and the port’s own bonding capacity — over the past four years.

Northam also announced that another $20 million would go to pay for the Clean Air Communities program to make government fleets electric across the state.

“As we fight this global health epidemic, we are reminded daily that we must prioritize public health in a way we have never done before,” Northam said. “Through this investment, we are investing in the health and well-being of all Virginians.”

Reinhart, who showcased port operations to Northam while on the platform on top of NIT’s operations tower, said the port wants to be a catalyst for commerce around the state.

“We will continue to replace diesel and other emissions-driven technology,” Reinhart said, “permanently reducing pollution at the port facilities and improving the quality of life in nearby communities.”

On the eve of a scheduled court hearing involving a member of the Suffolk School Board’s dispute with the rest... read more