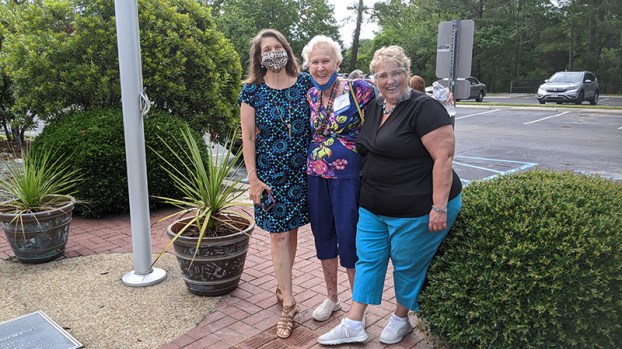 From left, Dabney Carr, Frances Carr and Rosemary Hazelette-Knight stand beside a brick that Frances Carr had placed there to recognize the Golden Circle Award of her daughter, Dabney Carr, Hazelette-Knight and Susan Nurney from June 1980 as part of Girl Scout Troop 435 of Suffolk. The Girl Scouts of the Colonial Coast held a dedication July 23 at A Place for Girls in Chesapeake.

Frances Carr has fond memories of being a Girl Scout troop leader for her daughter and other girls in Suffolk.

Carr, 82, started out as a Brownie Girl Scouts leader when her daughter, Dabney Carr, started her involvement in the fourth grade, and for more than 10 years as her daughter grew up with Scouting, was a leader for Girl Scout Troop 435 of Suffolk.

So when it came time for this year’s Girl Scouts of the Colonial Coast brick dedication ceremony, the mom had a surprise for her daughter, as well as Rosemary Hazelette-Knight and Susan Nurney, all part of Troop 435.

That surprise was unveiled July 23 at A Place for Girls in Chesapeake when their brick was revealed, with Frances Carr, Dabney Carr and Hazelette-Knight in attendance.

“This is fantastic to have the brick here, Mama. Thank you so much,” Dabney Carr said to her mother after the unveiling.

The brick Frances Carr bought and had dedicated to them honored the members of that troop who achieved the Golden Circle Award — now called the Gold Award — in June 1980.

“What I love about our bricks here at A Place for Girls is that they really showcase the love of our movement and the sisterhood of our movement,” said Tracy Keller, chief executive officer of the Girl Scouts of the Colonial Coast. “And for many years we’ve been adding bricks, which add another story each time we lay bricks, and it’s the story of a girl who conquered something and earned her Gold Award. It’s a story of girls who got together to say thank you to their leader. It’s the story of some of newest retirees who are here today because we get to honor them and their dedication and service to our movement.”

Keller singled out Frances Carr for taking Girl Scouts on trips to places far and near, including England, the Appalachian Trail and Canada, and she noted the lessons her troop learned with her help.

“All the things that you taught them as their Girl Scout leader, and the fact that their memories of you are so fond,” Keller said, “and that you are still so important to their lives, I think, is incredible that your story is now here in our tapestry of bricks.”

But for Frances Carr, it was as much, if not more, about what the members of her troop achieved, and she beamed with pride looking back at those things.

“You have more work, more time, and you have a small window when you’re going to hit this and make it before … going to college,” Frances Carr said their efforts to earn the Golden Circle Award. “It was a good thing.”

Dabney Carr, 57, and Hazelette-Knight, 59, both graduates of the old Suffolk High School, were both surprised and touched by seeing the brick honoring their achievement.

“This is wonderful,” Dabney Carr said. “It is something that will be here at the Scout center, and Scouting was such a huge part of our lives growing up, and for it to be commemorated here, is wonderful. … It’s just wonderful to know it’s here and that it benefited Scouting.”

Both Dabney Carr and Hazelette-Knight praised Frances Carr for the work she did with the troop, allowing them to carve out their own independence.

For instance, the troop took a trip to Canada during their junior year of high school, and Frances Carr allowed them to research and plan the trip, and the girls had to earn and save their money for it. Dabney Carr said they received a lot of community support for their endeavors.

As they looked at their new brick, and other bricks they had a part in dedicating over the years, it brought back many memories as they filled in each other’s sentences about their activities, and the pride they took in them.

“It was like the sky was the limit,” Dabney Carr said. “If there was something we as a troop determined that we wanted to do, she gave us the wings to do it.”