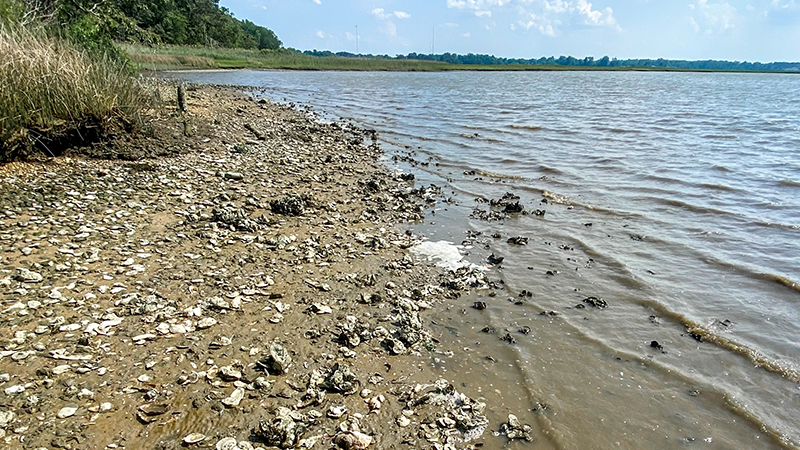 A new project on the Nansemond River aims to solve two problems at once — preventing erosion while helping the oyster population.

Announced last week, the project is a partnership between the Nansemond River Preservation Alliance and the Chesapeake Bay Foundation. It is being funded by the Suffolk-based Bleakhorn Foundation.

“The difference here is that we are looking specifically at sites where there’s erosion or other problems with the shoreline,” said Kenny Fletcher of the Chesapeake Bay Foundation, differentiating this project from previous efforts that focused on oyster restoration. Rather than using other methods to solve the erosion or other issues, constructing oyster reefs in these places can solve the same problems and improve the oyster population at the same time.

Similar projects have been done on a small scale in other places, Fletcher said.

Sites have already been selected, and work is scheduled to begin next year.

“This project is very exciting, and it’s going to contribute to the information that NRPA has been collecting for the last 10 years about the oyster population in Suffolk,” said Dr. Elizabeth Taraski, president and chief executive officer of the Nansemond River Preservation Alliance. “It will also at the same time increase the oyster population along the Nansemond River.”

“Along the Nansemond River you’ll soon see how oysters can naturally reduce erosion and pollution. This will give a better understanding of restoration techniques that not only bring back the native oyster population, but also protect shorelines,” said Chesapeake Bay Foundation Hampton Roads Director Christy Everett. “NRPA’s local expertise, in-depth knowledge of the river, and network of volunteers will complement CBF’s decades of oyster restoration experience to help make the Nansemond a model for using natural methods to protect shorelines.”

Nature can help mitigate the impacts of erosion and flooding that threaten many waterfront properties. If waves first hit oyster structures lining the shore, some of the force of the waves is absorbed before it can cause erosion. This assists in the resurgence of marsh grasses, which also buffer waves and lessen flooding.

Building shorelines using natural processes brings back those benefits and can be less costly and more effective than hard shoreline protections such as riprap and bulkheads. Oyster reefs also provide homes and food for fish, crabs, and other wildlife and filter pollution that enters waterways.

In the Nansemond River, different materials will be used to construct oyster reefs along shorelines. The results will be monitored and evaluated to determine the most effective practices in the region. These steps will lay the foundation for future shoreline oyster restoration work throughout Hampton Roads.

Oyster populations in the Nansemond River region have faced many challenges. Today, a significant amount of Suffolk’s waterways remains closed to shellfish harvesting due to high bacteria levels, robbing the region of economic opportunities and limiting the areas watermen can work.

Taraski said the sites will be integrated into the NRPA’s education program, which takes students onto the water to learn about science and the environment firsthand. NRPA is also recruiting new volunteers for the project.