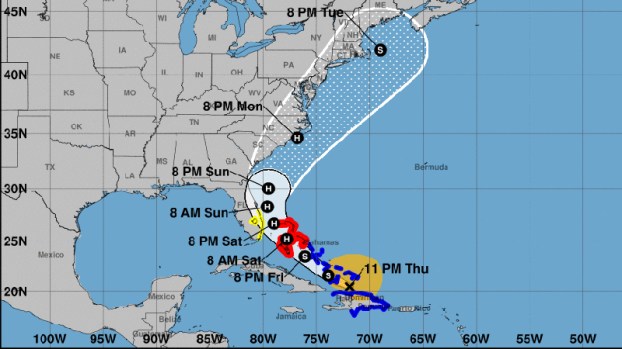 Virginia could feel impacts from Isaias

The likelihood that Hampton Roads will see effects of Tropical Storm Isaias increased Thursday as the storm crossed the Dominican Republic and Haiti and took aim at the continental United States.

The current forecast track shows it moving toward Florida and then curving away, hugging the East Coast potentially all the way up to New England. It could strengthen into a hurricane by the time it approaches North Carolina and Virginia on Monday into Tuesday.

“Tomorrow and through the weekend, folks are really going to have to start paying close attention to what’s going on with the track,” said Jeff Orrock, meteorologist in charge at National Weather Service Wakefield. “We’re just seeing a lot of variability right now with the intensity of the storm and the timing of the storm.”

There is increasing confidence that Isaias — pronounced “ees-ah-EE-ahs” — will affect the East Coast in some way, Orrock said. “Exactly when the storm arrives and how intense it is, there is more variability,” he said. “A best case for us is the storm stays offshore; worst case, this thing is a hurricane when it hits North Carolina and moves up into Hampton Roads. There’s still a chance it could be a hurricane right off the Virginia coast. Folks at this point need to start paying attention.”

The timing of the storm’s impact on Hampton Roads is likely to be between Monday evening and Tuesday afternoon, Orrock said. Heavy rain in the area is likely, but how intense the winds are depends more on the storm’s exact track. He said to “plan for tropical storm-like conditions.”

Regardless of how Isaias affects Virginia, it’s a good chance for people to ensure they are prepared, Orrock said.

“I’d also emphasize folks to look at their hurricane readiness plans,” he said. “We’re not even at peak hurricane season yet. If anything, this should be an eye-opener this weekend.”

Orrock encouraged everyone to test their generators, if they have one, and ensure they have necessary documents, a non-perishable food supply and bottled water readily available — whether it’s for Isaias or the next storm.

Two people were displaced from their home on Woodlawn Drive due to a fire on Thursday morning. Suffolk Fire &... read more