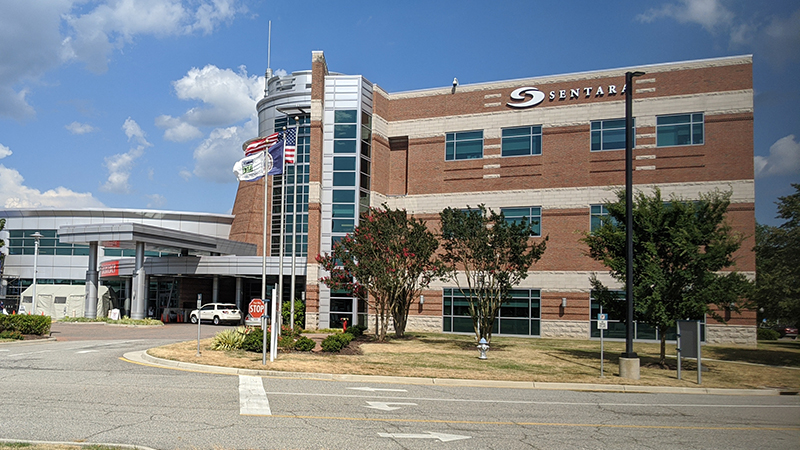 While it is seeing more COVID-19 cases, a Sentara Obici Hospital official said it is well equipped to handle them and other patients who have a medical emergency.

While not disclosing how many COVID-19 cases are currently coming into the hospital, Dr. Michael Genco, vice president of medical affairs, said the number is on the rise, but fewer of those people are needing to go into intensive care or be put on ventilators.

“The Hampton Roads region is definitely seeing an increase, and Obici is right there with them,” Genco said. “That’s something that we obviously keep a very close eye on, how many people are we seeing, how many are in the hospital, and every day, we’re looking at services we offer to make sure we can continue to safely offer those services.”

As of July 30, Genco said the hospital has not had to ration any of its services and is still taking care of anyone that comes through the emergency department.

“We haven’t cut our services at all,” Genco said, “but … as the numbers go, that’s something that we have to keep a very close eye on, and we want to make sure that whatever we’re doing, we’re doing it as safely as possible. And if we get to a point where we can’t do something safely, then maybe go look at postponing it until we can.”

He urged people not to delay getting treatment for any emergency or serious procedure. He said people were delaying care in April and May and they had more problems because of it — and, he added, it “broke my heart.”

“We’ve had, obviously, a lot of experience now with COVID,” Genco said. “I feel like we have really good processes in place to keep people safe when they come to the emergency department.”

Obici is seeing, proportionally, roughly the same percentages of COVID-19 patients that the rest of the Eastern Region is seeing, Genco said. Across the Sentara Healthcare system, he said it has about 300 people hospitalized with COVID-19 as of July 28.

“We’ve definitely seen COVID move out of that older population. into the younger, middle-age population,” Genco said. “When we first started experiencing COVID back in April, a lot of the folks in the hospital were coming from skilled nursing facilities. The local facilities now make up a very, very small percentage of what we actually see in the hospital.”

He credited that to the nursing homes adjusting their practices to meet the demands of COVIID-19 in keeping their staff and patients safe.

Across the region, there are 554 people in hospitals with COVID-19 among the 2,499 people hospitalized overall as of July 30 — with 76 people on ventilators and 124 in intensive care. The region is staffed for 3,348 beds and has a surge capacity of 4,018 beds.

“Certainly, we’re seeing a larger percentage of people that are positive that are able to be managed at home without coming to the hospital,” Genco said. “Among the people in the hospital, we’ve actually seen a fairly consistent level — and this is just at Obici — we’ve seen a pretty consistent level of who has needed ICU and ventilators throughout the entirety of COVID.

Genco said Obici is experiencing what other hospitals in the region are experiencing, and that also applies to testing capacity. Like other hospitals, Sentara Obici does not have enough testing reagents. A reagent is a chemical that labs use to test patient swabs to determine whether or not someone has COVID-19.

“When you have a limited resource like that, you have to be very careful that you use that resource in a way to provide the greatest benefit for the largest population,” Genco said. “And so we look at that as well, and we’re trying very hard to make sure we get people to the appropriate testing location,” working with the Virginia Department of Health — in particular the Western Tidewater Health District — as well as urgent care locations.

He said the hospital is following Centers for Disease Control and Prevention guidelines on who is getting tested. Those who need surgery are also tested prior to it, unless it’s an emergency case and someone needs immediate surgery. In that case, he said the hospital has protocols to keep staff and patients safe, such as what personal protective equipment is required, how patients are prepared for surgery and how the anesthesia is done.

Like other hospitals in the region, Obici is also short on the drug remdesivir, which is allocated to hospitals by the state to use in treating COVID-19 patients.

“It’s not a drug, like an antibiotic, that you could just order more from the supplier,” Genco said. “Your allocation is what it is. And so, we’ve been trying to really prioritize use of that medication for people that we think it’s going to have the best benefit, and we’re using the evidence-based guidelines that have come out around who it seems to have the greatest impact in.”

As far as other treatments, they still prone patients early in the treatment process to try to prevent intubation, use steroids for patients once they go on oxygen, and use convalescent plasma, which is taken from patients who have already recovered from the disease.

“We have the pulmonologist, the critical care specialists at Obici have been on board with convalescent plasma from the get-go,” Genco said. “I think that they have been very conscientious about screening people, wanting to use that scarce resource in the most constructive and useful way possible. But if a patient qualifies for it, they’re using it.”

Genco said Obici would be prepared for whatever happens in the community while also being flexible if need be.

“If you have a gathering, and people are being very conscientious about wearing their masks and about spacing appropriately and practicing meticulous hand hygiene, then that’s a situation where I think we could do very well, and not have a huge, huge influx,” Genco said. “When people don’t do those things for whatever reason, then the number of cases go up like what we’re experiencing now.”