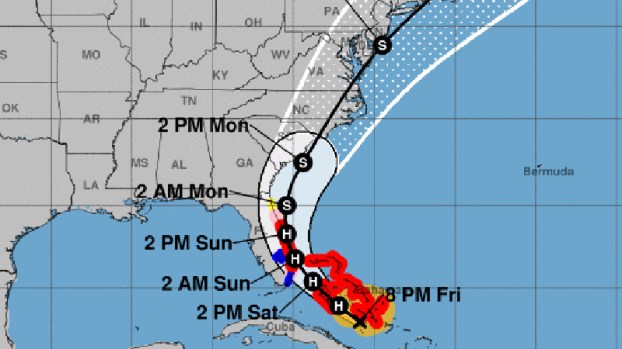 Region could feel impacts from Isaias

It may be early in the hurricane season, but it’s time to get your plans ready.

The National Weather Service’s Wakefield office is tracking Hurricane Isaias, which as of midday July 31 was a Category 1 storm with maximum sustained winds of around 75 mph and was moving northwest at 16 mph.

The storm was in the southern Bahamas, with its current forecasted track having the storm moving up the East Coast and making landfall somewhere in North Carolina, according to Wakefield meteorologist Cody Poche.

Isaias — pronounced “ees-ah-EE-ahs” — was expected to track close to the east coast of Florida as it makes its turn to go up the East Coast of the United States, with tropical storm force winds between 39 and 73 mph extending 200 miles from the center of the storm.

By the time it makes landfall and works its way into southeastern Virginia, Poche said the storm would likely be at tropical storm strength, and would not impact Suffolk and the Hampton Roads region until late in the day Aug. 3. The southern Mid-Atlantic region could begin to feel tropical storm force winds by that morning.

“It could bring gusty winds and heavy rain with it as it moves across the area,” Poche said. “It is really dependent on the track of the storm.”

High pressure in the Atlantic Ocean is pushing the storm closer to the coast, though a trough of low pressure in the southeast U.S. is interacting with it and could cause Isaias to curl along the East Coast, according to the National Hurricane Center. Poche said the storm had been slowing down as it has worked its way through the Bahamas.

There was a hazardous weather outlook for Suffolk and Western Tidewater during the afternoon July 31 for a storm unrelated to Hurricane Isaias. There were no warnings or watches out for anywhere in the region at midday July 31, but that could change as Isaias moves closer to the region.

“It really just depends on how far inland it makes it, like where it makes landfall,” Poche said, “so it can make landfall in North Carolina and then, by the time it reaches us, it’ll be over land for about 100 miles as it hugs the coast.”

Poche said now is the time for people to check on their hurricane readiness plans, and pay attention to forecasts from the National Weather Service’s Wakefield office as well as from the National Hurricane Center as Isaias moves up the East Coast.

A Q&A on police tactics

Editor’s Note: After the deaths of Breonna Taylor and George Floyd and protests that turned violent in many areas of... read more