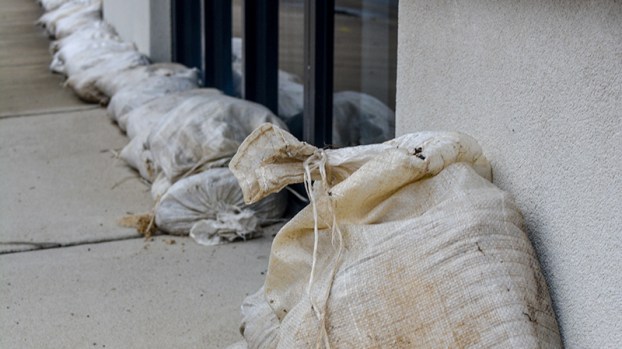 Sandbags were being used by some businesses in downtown Suffolk on Monday as they prepared for the arrival of Hurricane Isaias.

City declares state of emergency ahead of storm

Suffolk City Manager Patrick Roberts declared a state of emergency ahead of a tropical storm that was expected to dump several inches of rain and bring strong winds, possible flooding and other damage to the city and surrounding area.

The declaration allows the city to coordinate with the state in its response and recovery efforts should there be impacts from Isaias, which is expected to make landfall near the North Carolina-South Carolina border and then skirt up through communities east of Interstate 95.

The city’s Emergency Operations Center at Fire & Rescue Station 6 on Kings Fork Road, was activated at 8 p.m. Aug. 3. It had been operating under virtual activation for several days.

Spokeswoman Diana Klink said the city and its Office of Emergency Management has been monitoring Isaias since the middle of last week to determine potential staffing levels and preparing and fueling equipment and other resources while focusing on areas with known drainage issues. It has also been securing its facilities and assessing the potential need to activate emergency shelters.

Various city departments have also been making storm preparations, Klink said, including checking storm drains and pump stations, inspecting and securing equipment, checking chainsaws and storm-related equipment and vehicles for preparedness, and reviewing staffing to support emergency conditions. Generators have also been fueled and put into position in the event of power outages, and sites have been secured. City staff is also prepping to do post-storm damage assessments.

For residents seeking storm-related information, they can call the operations center at 514-4570.

Ahead of the storm, the city’s Public Works Department and TFC Recycling canceled curbside refuse service for Tuesday.

Refuse service that was previously scheduled for Aug. 4 will be picked up Aug. 5, with a resulting one-day delay for the rest of the week. Trash must be placed at curbside no later than 7 a.m. on the day it is to be collected.

The city also advised residents to put any loose items inside with strong winds in the forecast, and said that if residents live in areas known for drainage issues, to take necessary precautions such as moving their vehicles to higher ground.

The city also announced that it would temporarily reopen Fire & Rescue Station 4 at 837 Lake Kilby Road in advance of the storm. It said it would re-evaluate the building’s status with its ongoing repairs after the storm has moved through the city. The rescue station has been closed since June 3 to perform work on the engine bay.

City offices are also closed Aug. 4, and all scheduled special events, including summer camp, swim lessons and curbside pickups at the Suffolk Public Library, have been canceled. Also, the Mills E. Godwin Courthouse complex was closed.

While there have been no evacuations ordered, city and state officials are advising people to pay attention to the latest weather forecast and take any needed precautions based on the latest storm track, storm surge and the potential for tidal flooding.

The Virginia Department of Transportation said it has been readying trucks and equipment as Isaias begins to have an impact on the area.

VDOT is also inspecting drainage facilities and when necessary, cleaning them, and putting staff in position for additional traffic monitoring, emergency response and assist drivers on major routes. It has also lifted lane closures on major routes, where possible, to keep roads clear for emergency responders. VDOT has also been in contact with debris and tree removal crews to be on standby once the storm arrives.

It cautions anyone driving to have an emergency kit for their vehicle and home.

Dominion Energy said it is ready to respond to any power outages resulting from the storm. It is advising people to have an emergency kit with flashlights, batteries, cleaning supplies and face coverings.

“We’re preparing for the possibility of a multi-day power restoration effort,” Dominion Energy stated in a news release, “and we have staged crews and equipment across our Virginia, North Carolina and South Carolina service areas.”

It also offers additional advice on preparations, staying safe during the storm and what to do if there is a power outage or other issue affecting power or power lines. It cautions people to beware of downed power lines and to properly connect their generators if they have one and need to use it.

Tropical Storm Isaias will bring wind, rain and some minor to moderate coastal flooding and river flooding to the area... read more