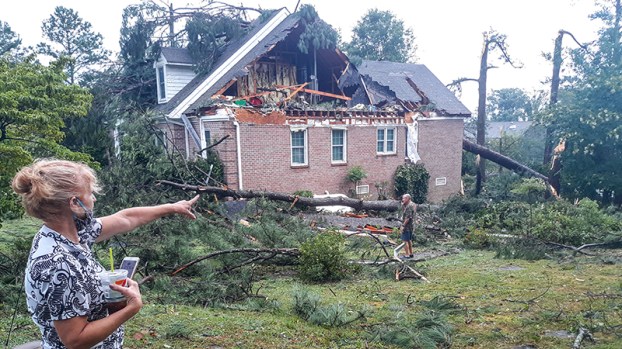 Mary Davies points out where the tree came from that caused heavy damage to her Riverview home during a likely tornado spawned early Tuesday by Tropical Storm Isaias.

‘Everything else can be replaced’

Suffolk residents started picking up the pieces on Tuesday morning after Hurricane Isaias left destruction in its wake, likely spawning at least one or two tornadoes near downtown.

Meredith Stielow and her fiancé, Bryce Monteyro, bought their Riverview house on Western Avenue in January and have already canceled their wedding once due to the COVID-19 pandemic. They are supposed to get married next Saturday.

“We had fallen asleep on the couch,” Stielow said. “He heard the tornado warning, so he got up and looked out the window and it was really quiet — and then he heard a loud whistling noise.”

Stielow said he woke her up and rushed her to the hall bathroom, where they began screaming for their roommate. He started coming down the stairs just when the tree fell into his bedroom.

Stielow called her mom and stepdad, who live just down the street, and they came to pick them up while the storm still raged. Stielow and Monteyro took their two dogs, two cats and their birth certificates with them.

“Everything else can be replaced,” she said. Later in the day, family members were helping rescue bridesmaids dresses for their upcoming wedding as well as other necessities and mementos.

Just around the corner, Mary Davies and her husband, Tom, suffered heavy damage to their home, and he got a gash to the face.

“The alerts woke us up, and I was Facetiming with my son when we heard it,” she said. “The tree came in the back, opened up the back, and that’s where the wind was coming from, so it threw him across the room,” she said.

A sizeable contingent of family and friends showed up to the Davieses’ home to help them salvage clothes and move furniture to a part of the house where it wouldn’t get wet, while Tom Davies was at the hospital getting stitches.

Mary Davies said she was grateful she and her husband were OK.

“That’s the most important thing,” she said.

Residents on Culloden Street were among the first to bear the brunt of the likely tornado.

“It sounded like a train,” said Gene A. Jones. “I came to the door and looked, laid back down and that was when I heard the cracking noise.”

The storm passed through the Hall Place neighborhood south of downtown, where numerous trees were uprooted. Neighbors Zoe Meece and Arenia Rice described what it sounded like as they surveyed the damage.

“It was a giant lightning,” Meece said, pointing to her other neighbor’s tree on the ground. “It hit his tree. I could hear it come down at the same time as this giant roar, like a freight train. Then I just started hearing … transformers blowing.”

“I heard the same thing,” Rice said. “A woosh, and then I saw a flash of something, that was about it. It was really fast. After a while, when it got quiet, we all came outside.”

The storm apparently moved on to the downtown business district after it was done with Hall Place. The Suffolk News-Herald building sustained heavy damage, as did Knight Finance and Brandon House furniture nearby. The storm also damaged Suffolk Fire & Rescue Station 1 before it arrived in Riverview.

More Riverview residents like Stielow and Davies described taking shelter during the storm.

Taylor Johnson said he, his wife, their 2-year-old daughter and the dogs went to the basement when they got the alarm. He remembers it being around 3:20 a.m.

“I went back upstairs to grab the dogs, and when I did I looked out the window and saw the blue lights from the power lines arcing,” he said. “And then I heard this really loud, low rumble and I’m like, ‘OK, yeah, we definitely need to get down to the basement and get secure.’”

Stephen Rhodes had lots of trees down around his home but little damage to the house itself. He said he and his wife went downstairs when they got the tornado warning alert. He was sitting on the back porch, and his wife was inside with the two dogs.

“Suddenly, I don’t know how to describe it, you could just tell something was coming,” he said. “I hopped inside, slammed the door, the power went out and it was over in what felt like three seconds, just that quick.”

Rhodes was working on freeing his vehicle from the bundle of downed trees and branches.

Residents clean up after likely tornado