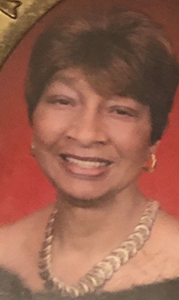 Rhoda Elizabeth Knight Griffin was born, the fourth of four daughters in Suffolk, to Arthur and Minnie Mason Knight on Aug. 29, 1931.

She joined Metropolitan Baptist Church in Suffolk at an early age. As a young adult, she served as a faithful Sunday school teacher and sang in the choir. In later years, Rhoda was a deaconess, sang in the Chapel Choir and served with the Harvesters Missionary Circle.

She was a 1948 graduate of East Suffolk High School and was a proud graduate of Shaw University in Raleigh, N.C. She received her Bachelor of Arts degree in education while minoring in art. While at Shaw, she pledged Sigma Gamma Rho Sorority and would go on to diligently serve the Alpha Beta Sigma graduate chapter in Portsmouth for many years.

More importantly, while at Shaw she would eventually meet the love of her life, Andrew Wilbert Griffin, a returning World War II Veteran. The two would get married in 1952 and go on to share 55 blessed years together. It would be from this union they would have two daughters, Venus Rotena and Andrea Renee.

She would use this period to gain further graduate level training as an educator from NYU, the University of Virginia and Old Dominion University.

In 1960, she would begin her career as an elementary school educator. In 1966, she would be a pioneering presence in the federally subsidized Title 1 program in the Portsmouth Public School System for the next 30 years.

Upon retiring in 1996, Rhoda continued working in the classroom as a substitute teacher in the Suffolk Public School System. Teaching was a passion for her and her students loved her. She received many awards for her works.

Rhoda loved to travel. She traveled extensively both at home and abroad. She visited at least 43 states in the United States and many countries in Europe, and many major cities in Russia, Mexico and Canada.

Among her many hobbies, Rhoda enjoyed her art, drawing and painting when she found the time. She also loved flowers and attended summer classes at Virginia State to become a flower show judge.

Her affiliations included: membership in local, state and National Education Association (NEA); Reading and Math Council (ASCD) selected for the International Reading Council; daughter in the Elks Lodge; Smart Set Club; and Portsmouth’s Pan Hellenic Council, among many other memberships.

In 2003, the Griffins would depart Suffolk for Silver Spring, Md., to live closer to both daughters. Here she would get involved with the local senior social scene and join the senior ministry known as Generation One at her daughter’s church.

Rhoda slipped peacefully away on Tuesday morning, July 28, 2020 into the arms of our Lord. She was preceded in death by her husband in 2007, and her two sisters, Martha K. Polson and Annie Mary Knight. Her memories will be forever cherished by her very devoted daughters, Venus Rotena Griffin, of Washington, D.C., Andrea Griffin-Mann, of Silver Spring, Md.; grandchildren, Auburn Andrew and Maya Mann and son-in-law, Auburn F. Mann Jr.; a very devoted sister, Irene K. Lawrence, of Portsmouth; sister-in-law, Iva Griffin, of Herndon, and a host of nieces, nephews, cousins and friends.

Viewing will be held from 2 to 7 p.m. Thursday, Aug. 6, 2020, in the Melvin J. Blowe Chapel of Crocker Funeral Home. A celebration of life will be held at 1 p.m. Friday, Aug. 7, 2020, at Metropolitan Baptist Church. She will be laid to rest in Albert G. Horton Jr. Memorial Veterans Cemetery. Professional services with dignity have been entrusted to Crocker Funeral Home Inc.

Patricia Laverne King, 69, entered into eternal slumber. A visitation will take place from 10 a.m. to 1 p.m., and... read more