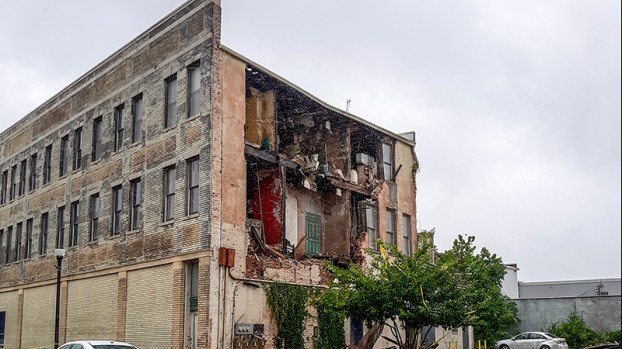 The Knight Finance building, which includes apartments on the upper floors, lost much of one side when a likely tornado passed over downtown.

Michelle Pierce said that time will be stuck in her head for a long time, after strong winds from an apparent tornado in the early morning hours of Tuesday morning knocked down a large tree in front of the house next door to hers on Cedar Street downtown.

Pierce, who has lived in her three-story at 202 Cedar St. for more than 15 years, said at one point during the storm, she had gone outside during a lull in Tropical Storm Isaias, and a neighbor had admonished her to go back into her house.

She saw trees along her street bending over toward the homes on her side of the street, and then when inside as the tornado was overhead, the doors inside her home were opening and closing, and the home itself was shaking.

“I keep getting goosebumps because I’m still shook,” Pierce said as she stood outside her home late Tuesday morning, her 11-year-old son and 16-year-old daughter finally asleep after being awake during the overnight hours. “It was like, we were chilling after we got the first alert, and it said it would be over by 2:45, so we went back upstairs and laid down and then, we were hearing the rain, rain, like a thunderstorm coming. So then I’m like, OK, and then it got quiet, so me and my boy got up — he was in the recliner and we were watching cartoons. It got quiet and we just hear this noise, whoooosh.”

She and her son jumped up and were yelling out that there was a tornado, and all of her windows were rattling.

Her thoughts at the time?

“What are we going to do? We’ve got nowhere to go,” Pierce said. “It’s crazy. We were just so scared, and then it just stopped.”

The city reported two possible tornadoes touched down during the early morning hours Tuesday in the downtown and King’s Fork areas of Suffolk as part of Tropical Storm Isaias, with strong winds knocking down trees and power lines, while damaging numerous homes and businesses.

An EF-1 tornado touched down in the city May 11, 2019. That tornado tracked about two miles across the city and measured about 200 yards wide.

The city reported damage in the area from White Marsh Road to the King’s Fork area, with the Riverview and Hall Place neighborhoods taking the brunt of one, while areas of downtown on Cedar Street near Peanut Park, as well as areas of downtown along South Saratoga and West Washington streets, also sustained heavy damage from downed trees and strong winds.

As of mid-morning Tuesday, Dominion Energy reported 21,000 outages in Suffolk, which is about 83% of its customers in the city.

By about 3 p.m. Tuesday, there were 15,570 Dominion customers in the city without power, with more than 180,000 people without power among its customers in southeastern Virginia as of mid-afternoon Tuesday. With more than 500,000 Dominion customers in Virginia, North Carolina and South Carolina who had lost power through midday Tuesday, it said it would be at least several days before power was fully restored, especially in North Carolina, Hampton Roads, the Northern Neck and Middle Peninsula. Community Electric Cooperative had reported about 2,200 people without power, or about 67% of its city customers, as of mid-morning Tuesday.

The city was also reporting multiple roads with downed trees and power lines, including Turlington Road, Bennetts Pasture Road, U.S. Route 58 eastbound at Wilroy Road, a part of Route 58 westbound, the 4700 block of Whaleyville Boulevard and the 5500 block of Godwin Boulevard. City Public Works crews are working in those affected areas, and city officials ask that residents stay off of affected roadways and out of damaged neighborhoods, as damage assessments are ongoing.

Heavy damage could be seen to buildings along South Saratoga and West Washington streets, including the Brandon House, which sustained significant damage to its windows and roof. The rear of the building at 101 S. Saratoga St. was blown out, and there was also damage to the front, rear and roof of the nearby Suffolk News-Herald building. Windows to cars parked beside the building were damaged, mostly on their right side.

The city asked residents to use “extreme caution” when performing damage assessments in the aftermath of the storm. With the sun coming out, many residents ventured downtown to get a closeup view of the damage.

Donald and Nicole Perkins, who live next to the News-Herald building at 132 W. Washington St., said they heard the apparent tornado come through around 3:13 a.m. They said they had three canopies that were destroyed, but their residence did not sustain damage.

“I heard the alerts go off on our phone and I got a call from another tenant here, a friend of ours, stating the same thing, and at that time, things (were) blowing around,” said Donald Perkins. “I looked outside and it was just a downpour.”

He said they received two different alerts on their phones for a tornado warning, waking them up, and then they heard what sounded like a tornado come through.

“It was very loud, yeah,” Donald Perkins said. “Even just this morning coming out after it had all passed, just opening the door my dog went crazy just hearing the wind outside.”

The city said damage assessment teams would be out throughout the day Tuesday, focusing on private property damage. Residents are asked to call the Emergency Operations Center at 514-4570 to report any damage to private property. It was taking calls through 5 p.m. Tuesday, and advised that people could also call Wednesday. beginning at 8:30 a.m.

Several city streets will also remain closed indefinitely, including West Washington Street at Main Street to Pine Street, as well as South Saratoga Street at West Washington Street to Smith Street. Detour signs are being placed in those areas. While sidewalks in several areas are also closed, businesses that were not directly affected remain open.

Cedar Hill Cemetery closed Tuesday and was to remain closed Wednesday so several large, downed trees could be removed.

The city had opened an emergency shelter at King’s Fork High School early morning Tuesday, but by 1 p.m., it had closed, as no residents came to the shelter or needed assistance there, city officials reported. The Emergency Operations Center at Suffolk Fire and Rescue Station 6 was to transition to virtual operations at 5 p.m. Tuesday.

The National Weather Service’s Wakefield office will be out at several areas of Western Tidewater and northeastern North Carolina to investigate possible tornadoes, according to meteorologist Mike Montefusco. He said there was also significant damage in the Gates and Bertie county areas of northeastern North Carolina, as well as parts of Western Tidewater and into Gloucester and Mathews counties on the Middle Peninsula reporting scattered wind damage.