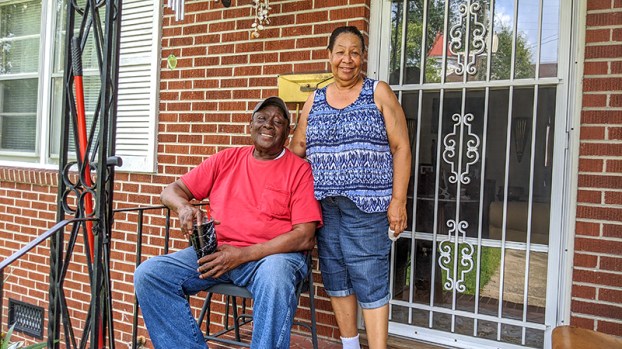 Johnnie and Margaret Babb said they are thankful to be alive after a tree landed on their Cedar Street house during an EF1 tornado that touched down just after 3 a.m. Aug. 4.

Margaret Babb earned the purple bruise she got on her arm, courtesy of the EF-1 tornado that snapped a large tree in her neighbor’s yard and landed partly on their roof as well as hers.

More than 24 hours after the tornado twisted above their downtown Cedar Street home, both she and her husband, Johnnie Babb, said they’re blessed to be alive.

But they had opposite reactions to their experience.

“It didn’t ever scare me,” Johnnie Babb said.

They were in the hallway when he called out to her. He couldn’t tell if there was a tornado actually overhead, but he knew when the tree crashed down onto the roof.

As they sat on their porch Wednesday watching trees and debris being cleared from their street, and waiting for power to be restored, she looked at the bruise on her arm, looked at her husband and showed it to him. “You did that,” she said.

The tree that landed on the roofs of the two houses dangled into the Babbs’ front yard. He said no water got into the house as a result of the damage.

The two tornadoes touching down in the city damaged 110 residential and commercial structures, according to the city’s Department of Community Development. Damages ranged from minor losses, such as missing shingles, to total losses, with damage estimates at $2.2 million.

The city advises that in addition to contacting private insurance companies, residents who have had structures affected should contact the Department of Community Development at 514-4150 to report damages.

Deputy Fire Chief Brian Spicer said Emergency Communications was notified of a tornado hitting downtown Suffolk at 3:44. a.m. Aug. 4. That tornado was an EF-1 with an estimated maximum wind speed of 100 miles per hour, according to the National Weather Service Wakefield office. That tornado formed near the Great Dismal Swamp and ended near Everets Road, according to the weather service, going about 20 miles, measuring about 150 yards in width and lasting from 3:02. a.m. until 3:30 a.m.

The other tornado, a confirmed EF-0 with a maximum wind speed of 80 miles per hour, traveled 11.7. miles from a rural area west of the swamp to 3.5 miles southeast of Windsor, with a path width of 100 yards.

The Enhanced Fujita Scale classifies tornadoes into six categories, ranging from EF0 to EF5. An EF0 is the weakest, with winds of 65 to 85 miles per hour, with the strongest being EF5 at more than 200 miles per hour.

Spicer noted that Suffolk residents endured 10 tornado warnings in four hours, although some of them covered different areas.

Public Works Director L.J. Hansen said their crews cleared roads in a number of communities throughout the city.

Near the origins of the EF-1 tornado off of White Marsh Road, residents were still cleaning up two days later, as one house was taken completely off its foundation, and next door to that, much of the side to another home was taken off, with a small camper tipped over and damage could be seen throughout the property.

Debris was scattered throughout the path of the tornado, and tall trees snapped and limbs all around as power crews worked to restore power.

On Cedar Street, as the sound of chainsaws cut through the downed trees in the street, the Babbs were thankful that they were not hurt.

Said Johnnie Babb: “I thank the Lord for that.”

About a dozen volunteers from Community Church hit the streets in the heat on Thursday to help refresh electric workers... read more