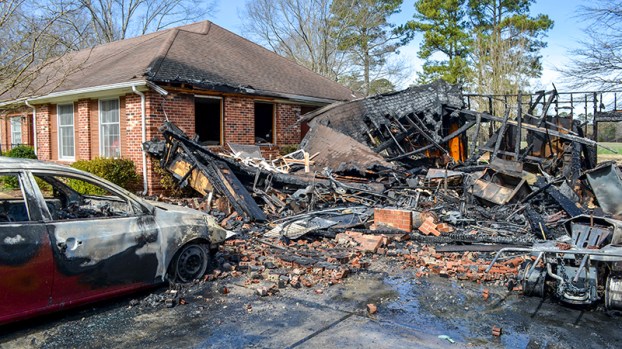 Suffolk Fire & Rescue Lt. Laurina Watson was injured at the scene of this fire in March 2019. On Monday, she received a Valor Award for her bravery.

Noticing that a brick wall was about to come crumbling down at the scene of a garage fire, Suffolk Fire & Rescue Lt. Laurina Watson had just enough time to make a quick decision to save a colleague.

And while she got hurt and is only just now returning to work following the March 2019 incident, neither she nor Fire Chief Michael Barakey would have changed anything about how they handled the fire. It’s that action that earned Watson a Valor Award from the Hampton Roads Chamber during an Aug. 10 ceremony in Chesapeake.

When Watson and her crew arrived to the fire scene, they saw the garage — the size of most people’s homes, Barakey recalled — fully engulfed in flames. The fire was getting perilously close to the house, and the water being put on the fire “was really not effective due to the large fire load inside the garage,” he said.

“I retreated back with my crew, and that was when I noticed the wall was starting to move,” Watson said in a video produced for the ceremony. “Then all I could think was I had to get my guy out of the way. So I turned to shove him.”

At that moment, the wall collapsed on top of her.

“I felt the weight of the wall on my legs, and that’s when I realized that I didn’t get myself out,” Watson said.

Barakey said it is every chief’s nightmare to see a firefighter get hurt.

Watson said she had no hesitation in what she did.

“I didn’t even think about myself at the moment,” Watson said. “It’s weird the things that you think when you’re in the middle of that situation.”

Attard and Scherer earned their award in recognition for their efforts on July 12, 2019, after a car crash with a shooting death on the on/off ramp near College Drive and University Boulevard.

They helped the victim — a passenger in one of the cars who would ultimately die as the result of gunshot wound. They then searched about a half-mile of busy road ditches and storm drains and found evidence to link to the suspects, according to a narrative read during the Valor Awards.

They worked with different law enforcement agencies to develop leads over the next three months, leading them in October 2019 to a suspect who confessed to the fatal shooting, according to the narrative read at the Valor Awards.

Linville was honored for his 2019 work in breaking up a drug and firearms operation.

Then-Police Chief Thomas Bennett wrote in the nomination for the award that Linville went “above and beyond his regular duties to bring this case to the federal level,” and was the biggest case in several years for the Special Investigations Unit and the Suffolk Police Department.

In mid-2019, according to the narrative of the incident read during the ceremony, Linville conducted an extensive investigation into a drug ring in the Holland area. After identifying several suspects through controlled purchases, Linville expanded the case to the federal level, working with Drug Enforcement Agency agents and an assistant U.S. attorney for federal charges of conspiracy, narcotics trafficking and human trafficking.

In December 2019, Linville got search warrants for a Southampton County home, where SWAT teams from Suffolk and Southampton converged and executed the warrants, recovering cocaine, heroin, marijuana, ammunition, firearms, stolen property and $25,000 in cash. He served six more search warrants related to the case, which is ongoing, and there are at least 15 forthcoming federal indictments, including one for charges related to an overdose death.

Margaret Babb earned the purple bruise she got on her arm, courtesy of the EF-1 tornado that snapped a large... read more