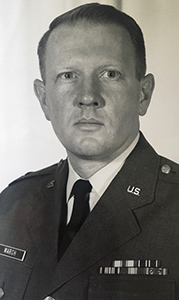 Born in Richmond, the only child of Clyde Vernon and Maude Lee Holland March, Mr. March grew up in Rocky Mount, N.C. He earned his Bachelor of Science degree from East Carolina College in industrial arts and sciences. He was commissioned as a second lieutenant in the U.S. Air Force and began a long career that spanned the globe. He specialized in communications and electronics, a cutting-edge field at the time.

In 1956, Mr. March married Gail Bennett Kerwin, a native of Washington, D.C. His career took them to eight states, as well as seven years overseas to the Philippines and Germany, taking photographs, absorbing local history, entertaining visitors and making lifelong friendships along the way. Mr. March also served for a year in both Iceland and Vietnam and earned several military commendations for meritorious service.

The Marches and their two children settled in Virginia Beach, where Clyde retired from the Air Force in 1979. He went on to a second career as a civil engineer with the city of Virginia Beach, retiring again after 30 years to pursue his hobbies full time.

He was active in the Thoroughgood Civic League as a long time board member, and served as president for a number of years. Clyde shepherded the new Neighborhood Crime Watch program into being and walked the neighborhood daily with Gail’s beloved poodle, Holly. Their home was always lovely and inviting, door always open, the lawn pristine, with good parties, delicious food and great company. We all paddled the lake, strolled the streets, returned for dessert and enjoyed the many slides Clyde saved that memorialized every home, historic site, family member and tourist destination from near and far.

In retirement, he researched the genealogy of the Holland and March families, tinkered with every new tool and technology and enjoyed discussions about politics and history.

He will be greatly missed by all who were fortunate to know him.

In addition to his parents, he was preceded in death by his wife of 60 years. He is survived by their son, Clyde Vernon III (Tripp), of Manhattan and Bridgehampton, N.Y.; daughter, Lynne Redgrave March and husband, Armand Louis (Skip) Baptista; grandson, Andrew Bennett Baptista, all of Alexandria; granddaughter, Katherine Hynson Baptista, of Chicago; his many nieces and nephews, grand-nieces and -nephews; and his many dear friends.

Service and interment will be held at Arlington National Cemetery at a later date.

In lieu of flowers, the family has requested that donations be made to Old Donation Episcopal Church, 4449 N. Witchduck Road, Virginia Beach, VA 23455. Condolences may be registered at www.RWBakerFH.com.