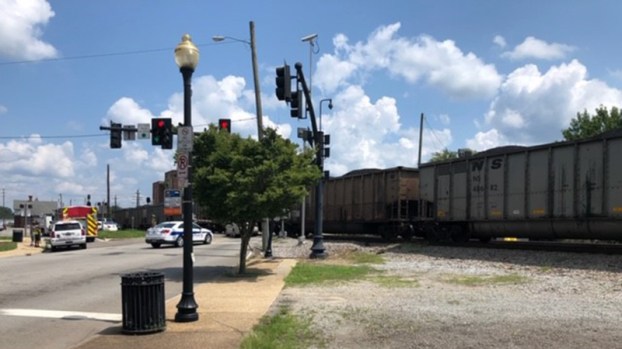 City officials said nobody was injured when a train struck a car in downtown on Tuesday afternoon. (City of Suffolk photo)

A Norfolk Southern train struck a passenger vehicle in an accident on Tuesday afternoon.

The accident happened at the railroad crossing on East Washington Street near Hall Avenue. It was reported at 1:29 p.m., according to a city press release. Suffolk Police and Suffolk Fire & Rescue units responded.

The city reported no injuries and no derailment of the train, the press release stated.

The investigation remains ongoing, and the roadway in the affected area closed until shortly before 3:30 p.m.

Noticing that a brick wall was about to come crumbling down at the scene of a garage fire, Suffolk Fire... read more