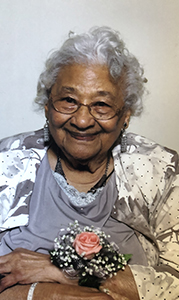 Even though Annie Land turns 100 on Aug. 14, she is still sharp and involved in her community.

Land is known in her community for her faith and civic activism. As a member of East End Baptist Church, she volunteered in its political awareness ministry.

“She was born in 1920 when women got the right to vote,” said Sandra Knight, a fellow church member. “She really values that and has voted in every election since she was 21.”

Knight stated that now that Land is unable to go out and vote, she gets her absentee ballot every time.

“She is a wonderful citizen,” said Knight. “She’s proud to be able to vote and encourages young people to have their voice heard and make a difference. She always calls me to sign as a witness on her absentee ballot.”

Land also loved her church. She has been a member for many years and tries to remain as active as she can while being homebound.

Pastor Wayne Faison is celebrating his sixth year at East End Baptist Church. He remembers the first time he visited Land at her home.

“When I arrived, I was taken aback by her hospitality and how welcoming and encouraging she was,” said Faison. “I make those visits to minister to her, and there she was ministering to me. She has such a jovial spirit. We wish we had more members like her.”

According to Faison, you can tell a lot by a person’s eyes, and Land has “bright eyes that connect with you and encourage you while not letting you drop the ball.”

Land was born in Nansemond County and has lived in Suffolk her entire life.

When asked how it felt being 100, she replied with a laugh, “I don’t know. I’ve seen better days, but thank the Lord I’m here.”

Land married Joel Land, and although she could not remember exactly the number of years, Land said it was “a long, long time.” Together they had one child, three grandchildren and three great-grandchildren.

Land attended East Suffolk School. She worked at Planters and retired in 1958.

Land’s advice for living a long life is “pray and be good to everybody.”

A Suffolk Circuit Court judge has awarded School Board member Sherri Story all attorney’s fees and other costs associated with... read more